AFTER only two months since the first reported outbreak of a novel coronavirus in Wuhan, a city of 11 million in China’s central province of Hubei, it has already spread to almost 80 countries worldwide, according to the World Health Organization as of 5 March 2020.

With more than 90,000 confirmed cases and over 3000 deaths, COVID-19 has become the most important global health scare since SARS in 2003.

China still accounts for the majority of cases, but latest figures suggest the number of new infections outside China largely outpaces those inside the country.

In comparison, SARS, which also originated in China, spread to 26 countries, infected about 8000 people and claimed 774 lives.

Although SARS was contained rather quickly, within four months, it still caused significant panic and economic cost, which mostly fell on China as the most-affected country.

The implications of COVID-19 will likely be much greater.

Apart from more people and countries being affected, the world of 2020 is also very different from the one when SARS broke out.

Today, markets are more integrated and interlinked, with a Chinese economy that contributes 16 per cent to the global gross domestic product, four times as much as in 2003.

Thus, any shock that affects China now has far greater consequences for the world economy.

This week, the OECD cut its forecast for global economic growth in 2020 from 2.9pc to 2.4pc, which would be the lowest level since the financial crisis a decade ago, warning that a prolonged and more intensive coronavirus epidemic could even halve this figure to a mere 1.5pc.

Global food markets – and the markets for the four AMIS-monitored commodities of maize, rice, soybeans and wheat – are of course not immune to these developments.

However, they are likely to be less affected than other sectors that are more exposed to logistical disruptions and weakened demand, such as travel, manufacturing and energy markets.

While basic food commodities may face some constraints stemming from transport interruptions and quarantine measures, impacts are expected to be less severe and shorter in duration.

Also, global reserves of non-perishable goods such as wheat and rice should be sufficient to meet any imminent demand.

This is especially so when external shocks are of relatively brief duration as this episode is hoped to be.

While slower economic growth often leads to a loss of appetite for value-added foods, including meat and vegetable oils, the demand for basic foodstuffs such as bread and rice could increase.

The panic engulfing many markets today could pose a threat to food security in places where food shelves are emptied in fear of possible shortages.

Such developments could indeed give rise to supply interruptions and higher food prices at local level, but for now they are not seen to have any substantial impact on international markets.

The manifold social and economic effects of the COVID-19 around the world have yet to be reckoned with.

Apart from the many uncertainties faced in assessing its impacts, which can be expected to vary significantly from sector to sector, agricultural commodity markets are braced for a cascade of negative factors lasting at least throughout the first half of this year.

Against this backdrop, the FAO-AMIS early projection for another year of near-record wheat production in 2020 is an important consolation not to be discounted.

The 2020/21 wheat crop first estimate is 763 million tonnes (Mt), close to the near-record 763.1Mt crop produced in 2019/20.  In its forecast, AMIS said in the northern hemisphere, dry conditions over winter-wheat areas in parts of Europe, the Russian Federation, and Ukraine remain a concern. 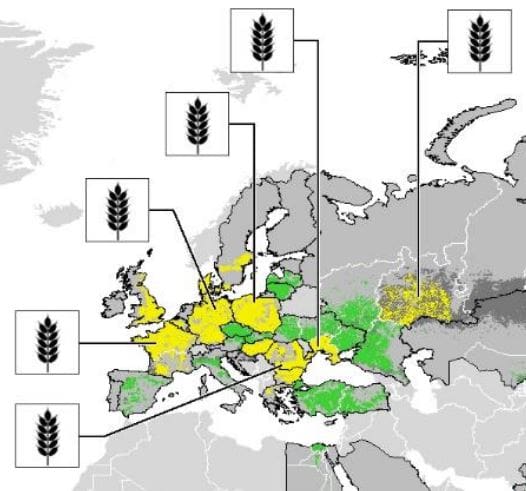 Following is a round-up of northern-hemisphere wheat-crop conditions: Winter wheat conditions are particularly under watch (yellow markings) in UK and parts of EU, Ukraine and Russian Federation. The symbol outside the perimeter of the circle indicates that dry conditions are the cause of the watch alert. Source: AMIS.