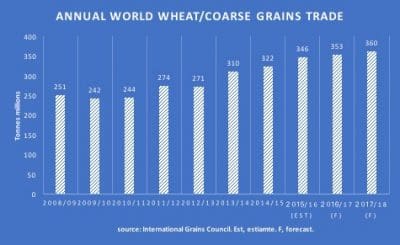 Chart 1: The world’s shipments of grain would be a record 360 million tonnes this year. source: IGC

IGC reported trade in the current 2017/18 year for wheat and coarse grains would total a record 361 million tonnes (Mt), up 2.4 per cent from 2016/17, bolstered by the ninth consecutive annual gain in corn shipments. See chart 1.

While harvests in 2017/18 were slightly smaller than the 2016/17 record, heavy opening stock had propelled overall availability to a new high.

For the first time since 2012/13, grain stocks are predicted to decline, led by stock drawdowns for corn, mainly in China, and barley in countries including Australia, EU, Canada and United States.

The monthly IGC index of prices rose substantially in February 2018, up 5pc across all grains and oilseeds, comprising the sub-indices for barley, up 8pc, soybeans and corn, up 7pc, and wheat, which rose 3pc.

IGC has forecast the volume of wheat traded globally in 2017/18 could be a record, and may include greater purchases by India and Iran.

It has also predicted that global wheat stocks could decline for the first time in six seasons.

India, typically self-sufficient in wheat, has not imported volume until 2016/17, when it purchased 6Mt.

In the three years to June 2015 India had a surplus of wheat, enabling it to export total 15Mt wheat.

While a decline in rice production from the 2017/18 record might seem unimportant to some, as a cereal competitor for arable land, rice’s 13pc price index rise in the year to February 2018 could promote higher area plantings next year.

World rice production is about 450-500Mt, of which India grows more than 100Mt and exports more than 10Mt in most years.