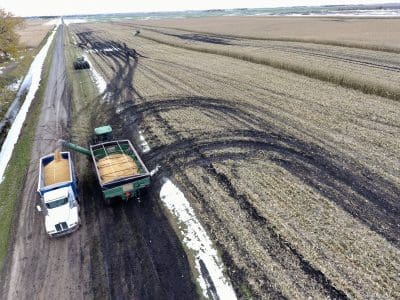 Rain is hampering the harvest of summer and spring-planted crops in North America including this corn crop in Canada. Photo: Cameron Hildebrand, Manitoba

INTERNATIONAL wheat prices continued to firm last week on the back of crop downgrades in the southern hemisphere, delays to the spring wheat harvest in North America, rumours of Chinese interest in United States wheat and firmer cash offers, particularly out of the Black Sea region.

All this drew attention away from burdensome global wheat supplies and prompted a round of short-covering by both the trade and funds, with the latter square or slightly long by week’s end.

The Chicago Board of Trade Soft Red Winter December wheat contract closed Friday’s session at a 14-week high of 532¼ cents per bushel (c/bu). This is a rise of 78¾ c/bu, or 17.4 per cent, since the most recent contract low of 453½ c/bu, set on September 3. The contract rose 24¼ c/bu across the week, or almost 5pc, to register its seventh consecutive weekly advance.

Argentine wheat crop estimates continue to leak lower on the back of sustained dryness across crucial production areas. Recent rains in many regions have not been strong enough to help wheat fields left gasping for moisture after weeks of dryness.

Weather and crop forecaster Maxar is calling the Argentine wheat crop 18.7 million tonnes (Mt), and at least one commercial trading house is said to be calling the wheat crop as low as 18.2Mt. This compares to the latest USDA estimate of 20.5Mt.

The Buenos Aires Grain Exchange (BAGE) suggested that while crop potential had stabilised in the east, yield losses could be as high as 40pc in southern Cordoba, eastern La Pampa and western Buenos Aires, and this number could potentially increase if critical spring rains do not arrive in time.

BAGE still put the winter wheat area at 6.6 million hectares, but it appears they are preparing the market for a downward revision of their current 19.8Mt forecast when they update production estimates sometime this week.

The spring wheat harvest in the US Dakotas and Minnesota continues to be dogged by rainfall, snow and blizzards. There is talk that any unharvested wheat is either going to be ploughed under for insurance, grazed out, or baled for hay, as the weather is now unlikely to remain favourable for long enough to get a header into the fields.

Canadian farmers are faring much worse, as rains and snow continue unabated. At least a quarter of the Canadian Western Red Spring (CWRS) wheat crop is yet to be reaped. While 95pc of the wheat area in Manitoba had reportedly been harvested by last week, only 70pc of the Saskatchewan crop and 60pc of the Alberta crop was thought to be in the bin.

Rumours surfaced midway through last week of China wanting to purchase as much as 2Mt of wheat from the US. There was no talk of wheat being on Beijing’s US$50 billion shopping list when news of the trade war breakthrough surfaced last week, and there are still no details, no grade breakdown, and no indication of anyone asking for offers.

However, news that wheat may now be included in the yet to be signed trade deal has generated some excitement in the US, and the futures and cash markets reacted accordingly.

Meanwhile, Egypt’s state-owned grain buyer GASC announced last week that it had purchased 405,000t of wheat for November 21-30 delivery in its latest tender. The purchase included 285,000t of Russian, 60,000t of Ukrainian and the same quantity of French origin.

The average purchase price was around $212.50/t FOB and once freight was added it equated to $230.70/t C&F. The price reflected the significant rise in European Union and Black Sea markets since the start of the month. The average Black Sea FOB price was US$8.70/t higher than the previous GASC purchase on October 9.

The higher price follows a rally in domestic wheat prices in Russia in recent weeks, and there appear to be several factors at play. There are reports of significant trade shorts that have been forced to cover when the market move caught them off guard, and there are also traders getting long in anticipation of further market gains.

The internal rally has also stoked up demand from the domestic sector in Russia. This is particularly the case for milling wheat which is reacting to competition from Kazakhstan due to their crop shortfall. Kazakhstan is the world’s second-biggest flour exporter, and a significantly smaller crop this season, along with poor quality, has sent buyers across the border to try and cover the supply deficit.

Here in Australia wheat prices were stable to slightly firmer last week despite a further deterioration in crop conditions in most regions. The National Australia Bank decreased its domestic wheat production forecast by 1.5Mt to 15.5Mt compared to their September number.

Interestingly, the rally in Russian wheat prices has seen the spread to Western Australian export values narrow to around US$30/t. This was as high as US$50/t only one month ago but is still too high for domestic exporters to buy international demand, even with the freight advantage Australia holds into key Asian destinations.

Reaping may have started in a number of areas, but the harvest price pressure is still ahead of us. It remains to be seen how that will play out this season. There is likely to be a reluctance on behalf of the trade to repeat last year’s harvest buying spree unless they can compete into the export market. But how will the grower react if prices fall?

Uncertainty around the final size of the Australian wheat crop and the exportable surplus only adds to the conundrum.