IN a world awash with grain, United States grains expert, Dan Basse, advises Australian farmers to keep a close watch on the Australian dollar because it will largely dictate the value of Australian grain prices. 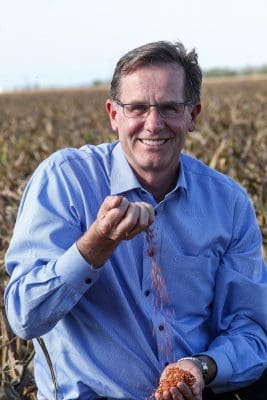 Travelling around Australia as part of Rabobank’s Visiting Experts Program, Mr Basse told Grain Central the only reason Australian farmers were “smiling a bit” compared to their US counterparts was because of the Australian dollar.

Mr Basse said the Australian dollar was expected to depreciate further over the next couple of years, while the US dollar looked set to remain in a bullish phase as the US raised interest rates and lowered the corporate tax rate.

He said this would help underpin Australian grain prices in a global grains market that was set to remain oversupplied in the short to more medium term.

Mr Basse said Australian farmers needed to understand they were part of the global grain glut.

“You had a big crop last year of 35 million tonnes, your exports have been relatively good, particularly with APW high protein wheat which has been in demand. The spread relative to ASW has been expanding,” he said.

“Because of the shortage of protein wheat in countries like Russia because of bugs (insect damage) and Europe because of too much rain during harvest, there is demand which is helpful. But I am concerned as we get into Northern Hemisphere harvest starting in June that some of that demand may wane.

“So, if the Australian farmer has any wheat to be sold, I would say consider doing it between now and the middle of May, because then buyers will rear back and wait to see how the crop comes along in the Northern Hemisphere.”

Mr Basse said the Black Sea and South America had also “changed the global grains landscape”, with Russia, once the largest importer of wheat, now establishing itself as the world’s largest exporter.

“Most of the growth in global grain supply is coming out of the Ukraine, Russia, Brazil and Argentina, with increases in cultivated area and yield improvements driving substantial increases in production,” he said.

In contrast, he said wheat production in the US was falling with US wheat seedings at their second-lowest level since 1900 and growers doing it tough.

“Low returns are seeing US wheat producers lose an average US$100 per acre (net) on their wheat crop, which has seen wheat relegated to a second-tier crop and not the principle grain it once was,” he said.

“Since 2013, the US farmer has seen his net revenue (profits after costs) go from US$120 billion down to US$60 billion. It has dropped by half.

“You can imagine what the Australian farmer would be feeling like if his net income position fell in half in three years.”

On the demand side of world markets, Mr Basse said world wheat trade remained flat with the 1.8 per cent annual increase in global grain demand met by the trend increase in world crop yields, without cultivating additional acres.

Mr Basse said increased demand from expanding world livestock herds might come from India or Africa, as China was currently self-sufficient in grain.

“Back in 2014/15, China imported one out of every five million tonnes of grain that were traded in the world. But now, there is a real possibility that China could become a net exporter of corn by 2018/19,” he said.

In a global grains sector facing so many headwinds, Mr Basse said a supply-shock would only have a short-term effect on the market.

“Historically, every seven to 14 years we have seen a significant weather event drive a rally in world grains markets, however the crop woes of the EU over the last two years or last spring’s damage to South America’s crops haven’t eased the supply pressure,” he said.

“There are many ‘black swans’ out there that we need to be aware of and watch to see how they play out,” he said.

“For example, there are heightened political tensions in Turkey, the world’s largest wheat miller, and there will also be effects from the recent votes of Brexit and Trump.”

Mr Basse said the Trump administration, in its budget that came out two days ago, had reduced funding for the Revenue Insurance Program for US farmers.

“That is the funding that helps them pay for guarantees in the market for variable costs such as seed, fertiliser and chemicals. He cut that by about 30 per cent, so that is a little concerning for the American farmer,” he said.

“I don’t think it is enough for the American farmer to leave land idle – or fallow as you would call it – but it may throw him into a deeper financial hole as he struggles under the weight of the rising US dollar.”