Cargill’s AWB pool manager, Charlie Brown, said pool commitments had been evenly spread across the country. “This year, compared with previous years, we have seen large increases in AWB harvest pool volumes from growers in Queensland, NSW and Victoria, while South Australian and Western Australian growers have continued to maintain their support,” Mr Brown said.

Market Check’s Tom Basnett said the outlook for ASW might not be so bearish. “The large ASW crop meant a higher percent of ASW was delivered against multigrade contracts at higher spreads than are currently being offered in the market.” (see chart 1)

“We estimate the proportion of ASW1 has come in above the historical average, at around 40 per cent of the national crop this year,” Mr Basnett said. 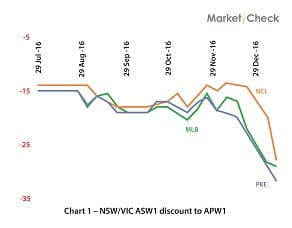 Growers typically optimise allocations of their harvest grade-deliveries against sales already on their books. The knock-on effect of them delivering ASW this year, against their multigrade contract sales, resulted in the trade selling ASW to buy APW.  “The trade was covering existing APW export shorts most notably to India,” Mr Basnett said.  “The immediate demand from the trade is for APW, not ASW, hence the widening spread caused by people buying APW and selling ASW.”

Mr Brown said the combination of the 32-million-tonne wheat crop this year and prices at six-year lows in Australia, had many growers left wondering what to do with their wheat crop.

Typical choices are to sell for cash (at six-year lows), hold and hope (pay warehousing or risk quality issues on-farm), or pool it.

“We have seen a huge increase in demand for the harvest pool this year, and it’s not only due to our regular customers growing bigger crops, but also we have seen a large number of growers return to us after many years of selling cash, with nearly 50pc of today’s deliveries coming from growers not in our pools last year,” Mr Brown said.

“Chicago futures in Australian dollars last week traded up to AU$214/t which is around a six-month high, perhaps indicating that the wheat market may again have some life in it. Unfortunately, however, the premium for Australian physical wheat has decreased over the past month likely due to the massive Australian crop,” he said.

Market Check – ASW may be not so bearish

Market Check had the viewpoint that the discounts may have gone too far in some grades.   “The net effect has been ASW being heavily discounted relative the global benchmark, CBOT wheat futures (see chart 2),” Mr Basnett said. “The export market 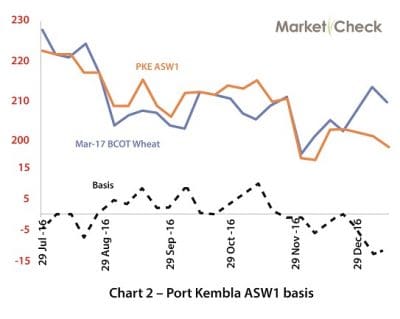 doesn’t need ASW now, but our view is there is upside in ASW prices relative to CBOT (basis appreciation) when the trade starts executing ASW1 sales post-harvest.  “We are encouraging our clients to take advantage of the offshore rally, and hedge their ASW1 instead of selling it, a strategy implemented in our Strategic Pool.”

The lateness of the harvest, and a spate of January pool deliveries prompted several pool operators to close their initial 2016/17 pools and open new pools, a strategy designed to preserve equity for those who delivered early.

Market Check told Grain Central yesterday its Strategic Pool would close on January 31, 2017.  “Our time of entry scaling means growers who enter our pool in a higher market are not subsidising participants who enter in a lower market and vice versa,” Mr Basnett said.

AWB hoped to keep its harvest pools open till the end of January, compared with (previous year) January 20, 2016, closure of the 2015/16 AWB harvest pool,  “The harvest is nearly a month behind last year,” Mr Brown said.  “As a pool manager our primary focus is always to protect participants who have committed tonnes, so with the increased demand, combined with relatively flat markets at the moment, it means we are needing to seriously assess closing the pool early as each day’s commitments roll in as the risk we face is lots of tonnes committed late and prices falling at the same time.”