SORGHUM is trading in limited volume at just below $300/tonne delivered Darling Downs as unseasonably warm weather and a lack of rain fuel concerns about feedgrain supplies up to November. 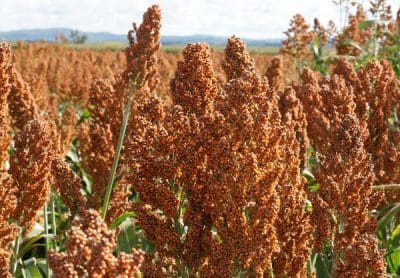 According to the latest ABARES report, the national domestic sorghum indicator price rose 7 per cent to $304/t in the week ending 19 July, to mark its first step above $300/t since September 2015.

The report said this followed the climb in all domestic cereal indicator prices in 2017 as concerns over dry conditions early in the season weighed on domestic crop prospects.

Trade sources said the cap on the market would come from forecast or actual rainfall which will temper buyer readiness to follow values higher.

“It’s hard to find the sell side of the sorghum market but as a guide, delivered Downs would pay $295/t Aug/Sep plus carry, so it’s fair to say the next stop is $310/t for delivered Brisbane,” one source said.

“Old-crop sorghum is in demand, but whether it cracks $300/t delivered Downs is yet to be seen for October-November,” a Downs-based trader said.

“Buyers are happy to hold their bids in the low $290s for August-September. A couple of growers that had parcels didn’t like that price; they can see premiums being paid for October.

“I’m not being an aggressive seller.”

The sorghum price has risen around $30/t in recent weeks, and trade sources said this had all but killed export demand for it as end users in the Burnett and on the Northern Downs in particular scrambled for nearby coverage.

Demand for old-crop sorghum has come from trade shorts who are paying $290-$295/t for prompt Downs delivery, and some consumers who have refused to pay for wheat at current levels.

Much of the domestic demand for sorghum from August to October is coming from the poultry sector.

“There’s not a lot of old-crop left on farm, certainly not genuine Sorghum 1, and that’s what the poultry guys are finding hard to get; they might have to buy wheat for more money.”

Another trader said he believed all the Sorghum 1 had been spoken for.

“With a crop at 1.2 million tonnes, and exports taking 300,000t of that, we’re not left with much for the domestic consumer now.

“Everyone wants it in October-November because it’s cheaper than new-crop wheat.”

PAG Brokerage Services’ principal, Phil Albury, Toowoomba, said much of the demand for sorghum had shifted to October-December delivery.

“I’ve got buyers that are prepared to pay $280/t farm equivalent, or $310/t Brisbane delivered for old-crop Sorghum 1 for the last quarter.”

This is well up from the mid-May delivered Downs prompt price of $245/t.

“The bulk of the wheat is coming from south of the border, from as far away at Narrabri and Walgett,” Mr Albury said.

He said any wheat in Queensland appeared to be stored on farms in the state’s south-west, but growers would not let it go until rain improved prospects for their winter crop in the ground, and for the planting of new-crop sorghum.

A warm end to July has seen winter crops bolt, which has left them vulnerable to an August frost event that could impact yield prospects in the crucial phase of wheat and barley development.

“A cold snap could wreak havoc, but 10-25 millimetres of rain could turn the whole thing around,” one trader said.

Prices for new-crop sorghum are sitting at around $280/t track Brisbane.

“If you take $22/t off that to take it back to an on-farm Downs price at somewhere like Brookstead, you’re at $258/t, and that’s a pretty good price signal if we can get some planting rain.”

While some parts of the Eastern Downs like Clifton and Allora would have sufficient subsoil moisture to get a late winter-planted sorghum crop up and away, most areas are in need of a soaking rain to bolster prospects for an early 2017/18 crop.

New-crop wheat last week traded at $320-$330/t for November-December delivery, and has been bid at $340, which today has been insufficient to attract grower selling.”

“Growers are pretty nervous about crop prospects, and we know there are a lot of chickpeas in the ground, and not much barley.

“That’s why we’re seeing some strong interest from buyers wanting to have a look at new-crop.”

United Petroleum’s Dalby Bio-refinery has returned to full operation following a fire in late May which damaged the part of the plant which produces dried distiller’s grain.

The plant has emerged as southern Queensland’s main market for Sorghum 2, which has been discounted because of low test weights caused by the dry and fiercely hot 2016-17 summer.

“We’ve got our hands up for it,” a spokesperson for the plant said.

Trade sources said they believed more Sorghum 2 than Sorghum 1 was still in growers’ hands, and it was trading in a thin market at roughly $20 below the premium grade.