AN UNSEASONABLY hot and dry August, coupled with some harsh frosts, are expected to have trimmed at least 100,000 tonnes from the yield potential of Australia’s chickpea crop. 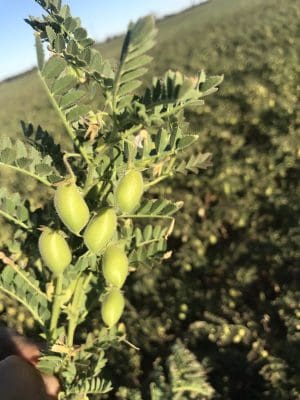 The crop was forecast by Pulse Australia pre-frost at 1.4 million tonnes, and its CEO, Nick Goddard, said that figure could not hold following consecutive weeks of drying weather.

“There’s no doubt yield estimates are down. We will issue an update in the next fortnight once the full impact of frost has been evaluated,” Mr Goddard said.

While some are seeing the crop’s outlook as decidedly bleak, one trade source said 1.3mt, plus or minus 100,000t, was still likely.

While Central Queensland is only a week or two from starting harvest in earnest, crops in southern Queensland and northern New South Wales are still flowering and setting pods, and may recover some yield losses attributed to this week’s and earlier frosts.

Emerald-based agronomist, Graham Spackman, said a few early Central Queensland crops were yielding 1.5 tonnes per hectare, but the average was likely to be closer to 1.25t/ha.

“Some have suffered significant frost damage, and those yields, and from crops which didn’t have much moisture under them, might be down to 1t/ha.”

Pain on the Downs

Western Darling Downs grower, Brendan Taylor, Warra, said the impact of  southern Queensland frosts in recent days would not be visible on his 250ha of chickpeas until Monday.

“The Downs has had its coldest three mornings in the past week at -2 to -5 degrees Celsius and in the worst cases, that could cut yield potential by half of what they were before that.”

“Chickpeas are remarkably resilient, but we still might have lost a tonne to the hectare of yield from the frost.”

“Crops planted into fallow still have moisture under them, so they could keep flowering and setting pods, but it’s going to have to rain in the next two weeks to give them the best chance of a reasonable yield.”

Mr Taylor said August and September were historically dry months, but this winter would be remembered as “rotten rainfall-wise”.

“We’ve had daytime maximum temperatures that have been 10 degrees above the average, so the crop bangs on a heap of flowers, and then the frost has knocked a lot of them off.”

Crops on the northwest plains of NSW are struggling, while slopes ones to the east of the Newell Highway are mostly looking at average yields if they were planted into good subsoil moisture.

Pulse Australia agronomist, Paul McIntosh, said the crop has had half the in-crop rain it had last year, and only the very best crops were likely to yield 3 tonnes per hectare, a result which was common in last year’s bumper season.

NSW Department of Primary Industries agronomist, Leigh Jenkins, said chickpea trials at Trangie were flowering about two weeks later than normal due to frosts, which have retarded crop development.

Ms Jenkins said growers needed to be mindful that a rain event, while good for yield potential, could spark the need for a fungicide application.

“As the crops start flowering and coming into pod, it’s important to keep on top of disease — particularly ascochyta — with upcoming rain events.”

“It’s a sensitive period for the plants, and they are even more sensitive if they’re stressed because of a lack of moisture.”

Prices for early-harvested chickpeas which can make a second-half September or October delivery are holding at around $900/t. For crops on the central and eastern Darling Downs which will be harvested in the second half of October and into November, a price of $800/t is available.