OVER the past month, Australia has seen both current and new crop wheat and barley markets strengthen dramatically, especially compared to harvest prices.

There are many domestic and international factors contributing to the current rally, and will continue to contribute in the second half of 2017.

These are predominantly domestic and international weather, and supply and demand.

2017 has been the year of records for Australia. Not only were production records smashed, we’re currently in the midst of our biggest export year ever.

This record export pace combined with a lack of grain sellers, due to the ongoing dry in Australia, is the driver for the current wheat and barley rally.

When buyers want grain, and sellers won’t sell, naturally, prices are pushed higher and higher until the sweet sell spot is reached.

Currently, grain buyers are scrambling to fill pre-booked shipping spots, which, combined with other factors, has pushed the price of wheat and barley up around $15-20/tonne across most port zones.

Figure 1 shows the recent run up in Australian APW1 prices ex Port Kembla (green line), Adelaide (yellow line) and Kwinana (blue line). The orange, maroon and grey lines represent the US, Russia and Ukraine pricing delivered into the key market of Indonesia. All values have rallied over the last few weeks, however Australian and US have increased the most.

At different periods through every grain growing season, both domestically and internationally, weather is watched closely by grain buyers and grain growers, and plays a significant role in grain price fluctuation.

Australian winter sowing is coming to an end, and many areas need a significant positive weather event to ensure the plant succeeds.

With the exception of southern NSW, Victoria and the Adelaide port zone, most areas of the Australian cropping belt have had little to no rainfall to start the season.

Internationally, America is coming to the end of its wheat and corn production cycle, and is experiencing warmer and dryer weather patterns than usual.

This is creating concerns around the crop ripening properly, and in turn concern for final yields and production numbers.

The dry weather could see funds rapidly exit these positions.

Based on the sheer volume of short positions, any attempt to buy these positions back would lead to a short and violent rally in Australian grain prices.

What could cause prices to fall?

Over the past 10 years the northern hemisphere has significantly increased their production numbers.

This poses a threat to Australian grain prices. Why?

The increase in production means Ukraine and Russia will compete against Australia into key export markets such as Indonesia, Philippines, Vietnam and Malaysia.

This could lead to a price war, and drive prices down in the second half of 2017 when the Black Sea crops are due to export.

Over the next four weeks, both Russian and Ukraine crops are still vulnerable to hot and dry weather, so all eyes will be watching weather updates in this region to see how this plays out.

Overall, with the marketplace so focused on weather conditions domestically and abroad, it would seem this, coupled with Australia’s ability to remain competitive into key export regions, will be the main drivers for short and long term prices in Australia.

If the Black Sea crop production were to suffer as a result of adverse weather, we will see grain consumers and buyers pay more to ensure supply, pushing Australian grain prices up as they go. 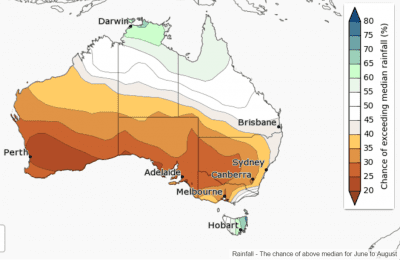