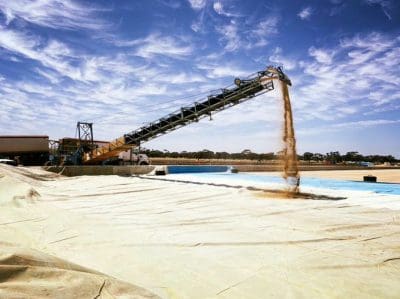 MAJOR eastern-Australian bulk-handler GrainCorp Ltd has received 1.1 million tonnes (Mt) of grain in the harvest to date, with a big fortnight in Victoria contributing the bulk of the 777,960t delivered in the two-week reporting period.

In its latest harvest update, GrainCorp said the Central and southern Queensland harvest was nearing completion, and good-quality wheat receivals were still coming through in clusters across southern New South Wales.

GrainCorp said barley and wheat was being received in the southern Mallee and Swan Hill regions of Victoria, and deliveries in the Wimmera were gaining momentum.

The company expects further increases in receivals in Victoria, with some rain forecast towards the end of this week;

Given the drought conditions this harvest, a significant share of production is expected to remain on farm or be delivered direct to domestic consumers.

Two-Day Payment terms, Secured Payments via CropConnect, up to 90 days of free storage, all available on GrainCorp’s Season Update website.

Table 1: Tonnes received at GrainCorp sites for week to 25 November and harvest to date since 1 October.