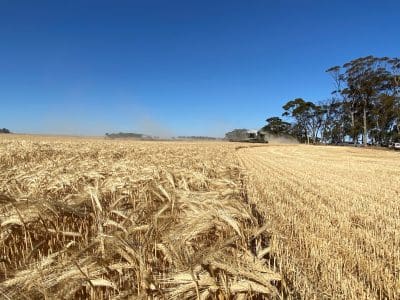 A taste of things to come? Maximus CL barley harvested in WA in 2020. Image: InterGrain.

WESTERN Australia’s barley industry is adjusting to an evolving feed/malting market weighting without China as its volume buyer, a move being reflected in the 2022-23 malting barley variety receival segregation recommendations distributed by the Grains Industry Association of WA.

WA is Australia’s biggest barley grower and exporter by far, its five-year production average to last year sits at 4.2 million tonnes and 4.9Mt is expected from the upcoming harvest.

Up to 30pc of WA barley can make malting grades, for which key attributes are germination, purity of variety, protein, grain size and natural dryness.

Prior to China’s exit last year, WA regularly exported more than 500,000t of malting barley per year to that market alone.

WA’s first-ranking customers for malting barley are operating not overseas but in Perth.

The malting barley buyers for Western Australian malthouses and for selection of parcels for shochu are key, ongoing and premiums, necessarily, are paid by them.

Growers need premiums to deliver malting because their decisions on variety and crop care are profit-based.

The high-end barley sales change in 2020 especially has ongoing effect on growers in the port zones Albany and Esperance, ports most reliant on export of bulk malting barley compared with Kwinana. 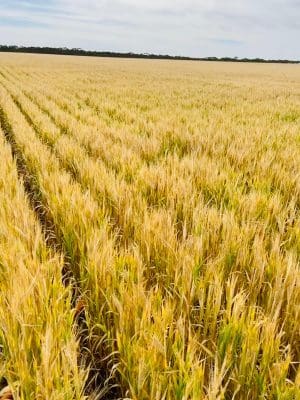 Perth-based, Kwinana malthouses buy about 360,000t barley locally for processing into malt for export and for locally made beverages and food.

Their drawing arc is relevant to port-zone segregations in CBH grain storages geographically concentrated in the Kwinana zone.

Export of bulk barley for shochu, is handled most opportunely in the Kwinana Port zone also.

Third ranked is the export malting barley trade for malting and brewing to destinations where WA market share is rising, including Vietnam, Mexico, Peru and Ecuador.

Markets in Asia are growing and buyers in Central and South America emerging, even though volumes are smaller than those shipped to China in its heyday.

It is the combination of all market rankings which secures price premiums for malting over feed and creates positives for grower gross margins.

Kwinana and Albany zones are more versatile, as receivals readily transfer to Perth for malt processing in addition to bulk export as grain from the port, with Kwinana being the conduit for shochu barley.

The WA barley industry supports the long-term aim of segregating up to two major malt varieties per port zone, with limited segregations on offer for minor, new or niche malt varieties.

Spartacus CL and RGT Planet dominate the area sown to barley in WA.

Spartacus CL will be segregated as malting at sites in all CBH Grain port zones, and RGT Planet in the Albany and Esperance port zones, and production regions in the Kwinana port zone bar north(east).

Maximus CL will have limited segregations in Kwinana, Albany and Esperance port zone sites to give markets opportunity to evaluate the new variety.

The recommendations point to senescence of several ageing varieties despite strong demand or attributes desired by certain processors.

Varieties considered suitable for the manufacture of shochu in Japan have been La Trobe and, more recently, Spartacus CL, while Bass, Flinders and RGT Planet have not.

La Trobe would earn itself niche segregation in 2022/23 which is subject to grower, marketer, storage-provider negotiation in Esperance, Albany and Kwinana port zone sites as occurred in 2021/22.

La Trobe was in the past five years the preferred shochu variety.

La Trobe will no longer be a segregated variety after the 2022-23 harvest, in part explained by approval of Spartacus CL variety approval for shochu after Japan raised the maximum residue limit (MRL) for imazapyr to 0.7ppm from 0.01ppm early this year.

Spartacus CL (Figure 1) in 2022/23 has gained the ACCEPTABLE (increasing) tag for shochu. 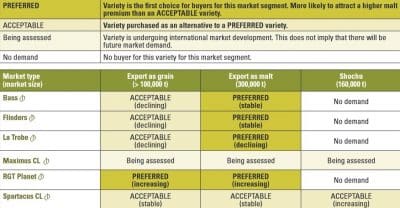 Segregation of Bass and Flinders for 2022/23 in Export as grain category are tagged ACCEPTABLE (declining) compared with previous year in which they were tagged “stable”.

Bass and Flinders are both considered as significant varieties for malting and brewing use in Japan and South-east Asia as they can be malted without the use of additives and are well-known by the market.

If market demand for Bass and Flinders does not result in attractive premiums, production of both will decline more rapidly.

RGT Planet is globally recognised, gaining accreditation initially in Europe and Spartacus CL, while popular with Australian brewers, does not have the same level of international recognition.

The conversation about older varieties in decline is overlaid by Barley Australia’s March 2021 accreditation of Maximus CL as being suitable for malting and brewing..

One of three varieties newly accredited it is early days for Maximus CL, the only new variety which will be malting segregated in WA at the 2022-23 harvest.

Segregation in 2022/23 will occur at sites in all port zones except Geraldton.

Production of Maximus CL will likely increase at the expense of Spartacus CL but during transition, market development will be critical to securing Maximus CL as a preferred variety.

Industry works hard to uphold quality, does not support co-binning of malt varieties in malt segregations and encourages growers to keep seed stocks pure by variety.

Though plant nutrition is a trade-off for grower yield, the domestic-use malting segregation selects protein in the range 10.3-10.8 per cent and export sales 10.5-11.0pc, the receival window being 9.5-12.8pc.

Retention on a 2.5mm sieve is at least 80pc and test weight minimum 64 kg/hl.

Admix and chemical standards include no glyphosate use near harvest, no whole snails and ryegrass ergot less than 3cm.

Figure 1, note about Market type (market size) categories; Volumes in brackets are indicative only of market size and vary considerably from year to year. Volumes show differences in market demand across each market sector and influence malt variety choice across port zones. Due to tariffs recently imposed on Australian barley imports into China the market size for export as grain has reduced from >500,000t to >100,000t.