AUSTRALIA’S winter-crop harvest is underway in all mainland states. While dismal quantities into the GrainCorp system tell the story of a difficult and disappointing growing season in eastern states, Viterra’s figures show brighter results in South Australia. 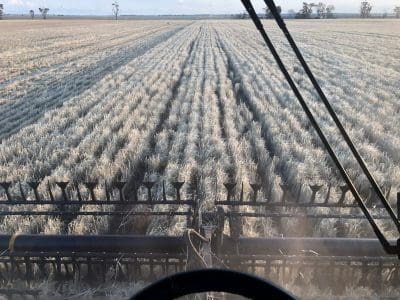 In its first weekly update for the 2018-19 harvest, GrainCorp said it had successfully reversed its export supply chain, and was actively involved in transferring grain, primarily from Western Australia, to meet strong domestic demand.

The transhipments have been discharged at GrainCorp’s Brisbane, Newcastle and Port Kembla terminals, and have totalled 156,000 tonnes to date.

GrainCorp indicated its expectations for big receivals this harvest were limited by the drought conditions, with “a significant share of production” expected to remain on farm or be delivered direct to domestic consumers.

GrainCorp said teams in its northern regions were working with local growers to adapt its network for harvest, and were operating many sites as needed.

South Australia’s bulk handler, Viterra, said it had received 50,722t in the week to 28 October to take its receivals for the harvest to date to 54,082t.

In its weekly harvest report, Viterra said most receivals were in the central region, while the eastern region received its first load, a delivery of barley at Walpeup last Tuesday.

Most of the receivals to date across Viterra’s network have been barley, with some wheat and peas, and this past week has seen a number of sites on the Yorke Peninsula and Lower North open for the season..