IN CASE you missed it, Australia’s sorghum-growing areas are in for a three-day heatwave which is set to turn fortunes for the grains sector as summer crops wither and lose yield potential, and price outlooks for cereals firm. 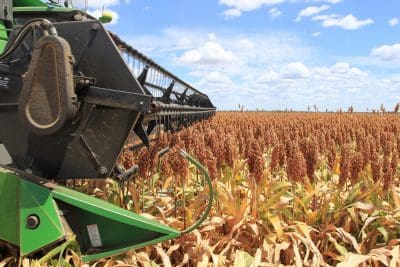 With the sorghum planting window in Central Queensland at best two weeks from closing and many planted crops literally dying for a drink, Australia’s 2017 sorghum harvest is now likely to produce half the potential it could-have-been last spring.

Meanwhile, the growers who were sweating on price rises for stored wheat and barley now have their opportunity to pick markets and drizzle parcels judiciously into a hot trade.

‘This is the most challenging year we have ever had”

Pacific Seeds’ Toowoomba-based sales manager and veteran of the sorghum industry, Bill Smith, said this season is the most challenging he has ever experienced.

A grain trader said they had calls this week from northern NSW growers with sorghum which would struggle to make second grade.

Some early-harvested sorghum is not meeting quality standard, being too low in test weight and too high in screenings to pass the sampling test, and will sell at a discount.

Traders are saying even though it’s not unusual to see pinched grain early in the harvest — early crops ripened in harsh conditions can compromise seed-size — it’s still possible that around one third of the sorghum harvest could drop below number 1 grade because of the hot weather and low rainfall.

For end-users, buying number two grade is a tradeoff, for the benefit of a discounted price against the headache of possibly having to reject loads as they come across the weighbridge.

For some, it was easier to switch out of sorghum and find a wheat supply, maybe from well beyond the region, which would eliminate sorghum quality hassles.

The phrase among traders this month is “the drawing arc”; as supply tightens in one region, they are crunching the numbers about how much further afield do their trucks travel to collect loads to feed beef-and-dairy cattle, chickens and pigs.

The Walgett district, for example, is ideally suited to handle big trucks carting grain to feed a range of sectors on the Darling Downs, and feedlots in the Condamine districts.

Consumers based in the Riverina are reaching south into Victoria too, buying wheat off the header, where harvest stragglers are still wrapping up.

Barley-watchers have been saying that barley was well-priced to lure buyers and that appears to be exactly what has happened. Well-priced Australian barley had a great chance in last weekend’s big Saudi barley tender, and the marketplace reported fast trading on the back of that and on the continuing scorching heat. A flurry of barley trading activity took place, then sellers applied more barley into the market at five-dollars higher and buyers took that too. Clear Grain Exchange had their second-busiest day ever.

Crop Connect reported a 38pc spike in F1 volume this week compared with the previous fortnight. The message to growers might have been to continue to scale-up until they feel buyer resistance.

What’s next for sorghum?

Pacific Seeds summer grains agronomist Trevor Philp told Grain Central that while some areas had been the same as normal, the conditions through Central Queensland, the Darling Downs, northern NSW and into the Liverpool Plains were extremely variable.

“The Liverpool Plains started out the same as normal, and the crops were good at flowering.  Conditions west of Dalby are pretty ordinary and remain patchy through the southern Downs.”

However, the 100mm of rain needed in January did not fall and, based on near-term weather forecasts, growers are unlikely to plant any further area.

They are most likely to hold whatever moisture they have in their soil and weigh up the options for an early planting of winter crop, either wheat or chickpeas.

It now looks likely Queensland and NSW will have planted only around 360,000ha of sorghum this year; average yields as low as 2.5t/ha are a rarity.  Hot days and nights could still make it reality this year, and that would put the crop at less than one million tonnes.

In the export market, the alcohol trade in China could account, over the full year, for 100,000-200,000t in containers. Bulk cargo exports are presently uncompetitive against US origin sorghum. The remainder – number one grade –  will be left to compete in the eastern states’ grain market. Sorghum below CSG1 grade will be discounted.