How long will Aussie wheat be discounted? The wheat market has shown strength in recent times, with CBOT wheat for December hitting just shy of A$370/tonne for the December contract (see here).

This is excellent news, as our pricing is typically driven by events overseas, especially when we have a large crop.

Whilst it is good, our pricing is at a large discount. The chart below shows the weekly average change in price across Australia and the weekly change in CBOT wheat.

So far this week, we can see that the rise in CBOT hasn’t flowed through as strongly to local Australian pricing. The weekly average increase in price for CBOT between this week and last week was A$18/t, with the average APW1 price rise being A$10.5/t.

This means that our basis has weakened over the course of the week. How long can low basis levels last? 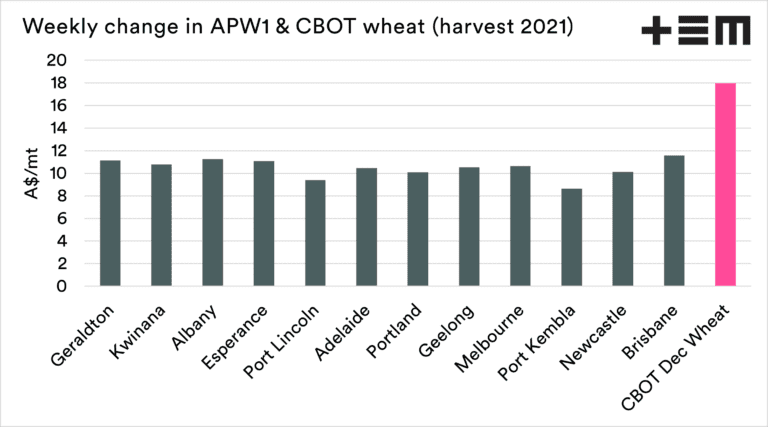 The chart below displays the monthly basis level between ASX and CBOT. In this piece, I am using ASX as a proxy for Australian wheat prices in general. Still, it is important to understand that it correlates better with the east coast.

Instantly you can see that Australian wheat tends to trade at a strong premium. The average since 2010 is +A$46/t. If we look at the more ‘normal times’ of 2010 to June 2017, before basis started ramping up, the average is still +A$26/t.

There have only been two periods of negative basis. This was the 2012 period and the current period.  So, two years since 2010 with negative basis holding, 2012 and 2021. 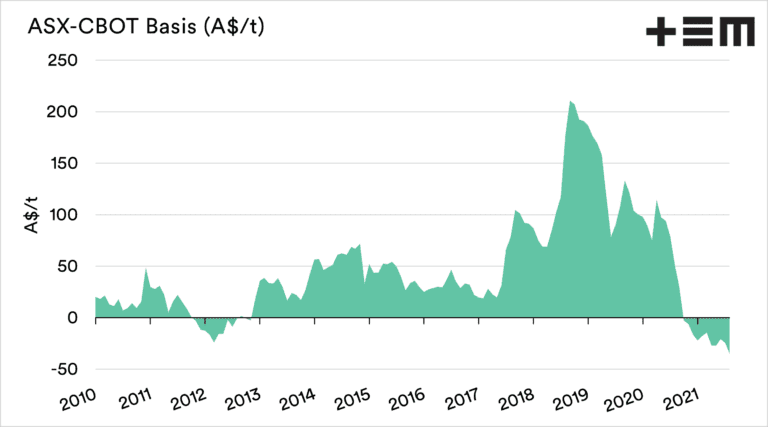 So, 12 and 21, what is different. Well, firstly, they are a palindrome – a number which is the same backward as forwards.

If I was a numerologist, I’d consider this important, plus the number 1221 is apparently an angelic number bringing spiritual awakening and harmony. However, numerology is up there with astrology and is nonsense.

So, let’s look at the facts. The 2011/12 crop was a large crop at 29 million tonnes (Mt). This resulted in basis remaining low from harvest right through to the following harvest. The following harvest 22.8Mt was grown. This was above the prior 10-year average (+1.8Mt), but a significant fall year on year.

This year is similar but slightly different. The current basis levels are substantially lower than they were in 2012, a pattern that emerged from the point of seeding onwards. Last year we had a massive crop at 33Mt. 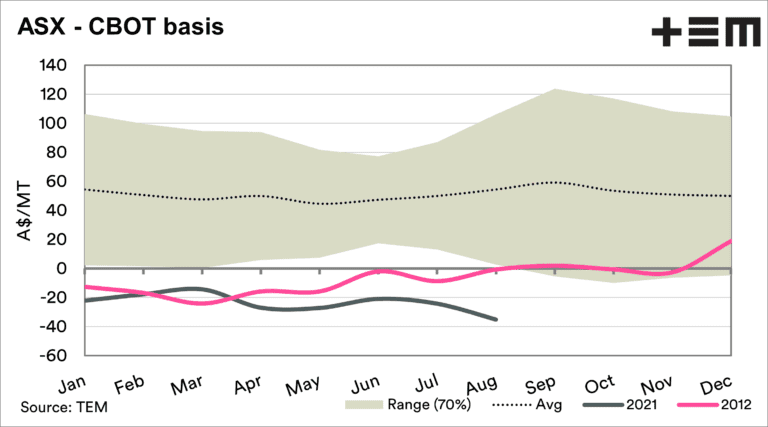 To reiterate a couple of important points I have made in recent times regarding low basis:

You only generally get low basis when production is very high. You, therefore, have more available to sell.

The ultra-high basis experienced between July 2017 and September 2020 was as a result of drought. With most having little to sell. Generally, the higher price doesn’t outpace the yield loss.

The high price overseas is assisting maintain a higher level, with prices at port remaining above A$300/t across the country. Imagine if we had poor basis, and poor overseas values.

Running the numbers, we are not that far from a drought, and the current conditions give plenty of scope for preparation.

If you want to know the basics of basis read this 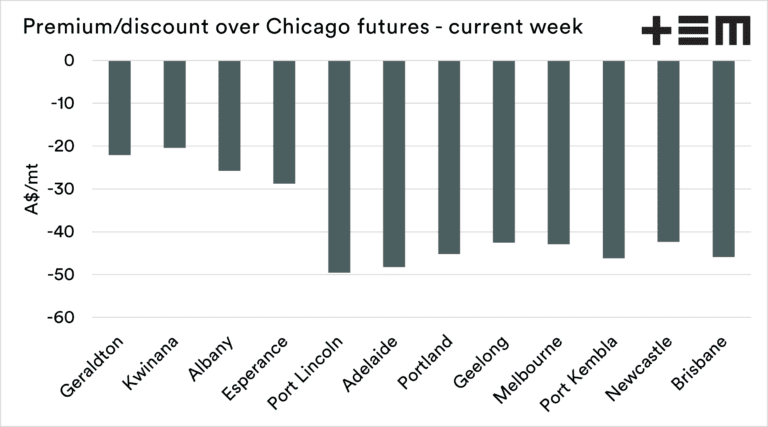