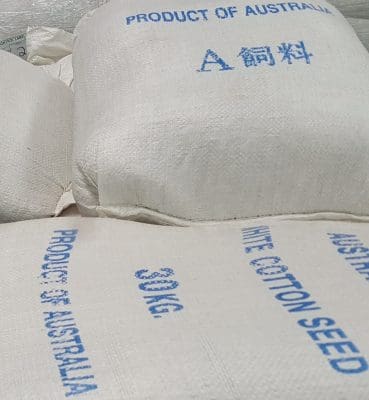 The best season in four years has not been met with substantial new international demand, in spite of Australia’s high reputation for quality cottonseed.

Trade sources report exports of containerised cottonseed are under way to Asian markets, but bulk demand from China’s dairy and oilseed-crushing sector, and from the US’ West Coast dairy sector, has been absent.

With feedgrain prices at multi-year lows, and prices for competing oilseeds soybeans and rapeseed becoming cheaper over the past six months, that outlook is not expected to change.

Australia’s beef feedlot sector consumes most of the cottonseed which makes its way into the market from gins in Queensland and NSW, Australia’s only two cotton-producing states.

The addition in recent years to Australia’s processing capacity of three gins in southern NSW has introduced cottonseed to southern beef feeders, as well as making it a compelling addition to dairy cow rations.

This new southern demand will be supportive of cottonseed values, particularly as cottonseed can now compete well geographically with canola meal.

While that business is likely to be supporting nearby demand in Australia, fresh trades presently are slow.

An exporter told Grain Central that in spite of some profit-taking washouts — reverse transactions between initial counterparties — their monthly container export bookings for cottonseed have been similar over May, June and July.

Australia’s 2016-17 intensely hot and dry summer, which had been preceded by the optimism of the 2016 wet spring, created price movements which facilitated trade.

In its most recent crop report in February, ABARES forecast Australia’s 2017 cottonseed production at 1.455Mt, compared with less than 1Mt in the three previous years.

In its next crop report due out on 14 June, the cottonseed figure is expected to be revised down to reflect less optimistic harvested area and yield.  A cotton trade source reported that 2017 outturns – lint yield compared with seed – were high.

In southern Queensland, cottonseed delivered Darling Downs at the transition between old and new crop had traded at A$430/t, compared with most recent trades at A$380-390/t for 2017 delivery.

Dry conditions in some grazing areas of eastern Australia also have some traders eyeing drought demand for cottonseed as a preferred supplement for sheep and cattle owing to its high oil and fibre content. Bollgard III dominates Australian cotton production, and import documents required by the Chinese Government presently do not specifically accommodate a differentiating gene in the cultivar.

While this has not affected shipments to date, it remains a subject of international protocol arrangements between parties including the governments of Australia and China.