IT’S a familiar meal for university students on a budget, and it plays a crucial role in maintaining demand for Australian wheat in our largest market. 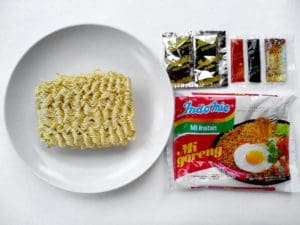 New analysis from Australian Export Grains Innovation Centre (AEGIC) has thrown into sharp relief the importance of the Indonesian noodle market to Australian wheat exports, and the challenges being faced.

AEGIC chief economist Professor Ross Kingwell said 13 billion packets of instant noodles are sold in Indonesia each year, accounting for 15 per cent of all instant noodle consumption on earth.

“Indonesia imports 3 to 3.5 million tonnes of wheat for noodles each year, largely from their preferred supplier – Australia,” he said.

“Instant noodles are by far the most popular form of noodles. Fresh noodles are a relatively small but still important segment.

Professor Kingwell said while the story for Australia was positive, it was not a simple one.

“Noodle consumption per person has gone through incredible growth over the past few decades, however that growth has now plateaued,” he said.

“Nevertheless, due to Indonesia’s strong population growth, overall demand for wheat for instant noodles will continue to grow by 350,000t by 2030. “Meanwhile, even though they prefer Australian wheat due to its unique quality attributes, Indonesian noodle makers are learning more and more about how to incorporate wheat from low-cost competitors such as Russia, Ukraine and Argentina.”

Professor Kingwell said a growing “premium” instant noodle market was emerging as incomes increase which could be an opportunity for Australia.

“These noodles are higher quality and Australian wheat is more likely to be used in this segment,” he said.

“Australia needs to defend its strong position in the instant noodle market, especially at the premium end.

“Importantly, Australia also needs to focus on the higher-quality fresh noodle segment. Fresh noodles, which make up about 20pc of noodle consumption in Indonesia, are more popular among wealthy, urbanised consumers. These noodles have more sophisticated quality requirements than instant noodles.

“Australian wheat is already recognised for its superior colour and colour stability, which is an important consideration for fresh noodle sellers who want to be able to display bright, yellow noodles for as long as possible.

But it’s not just about noodles. According to AEGIC’s analysis, the Australian wheat industry could capture other opportunities outside noodles, such as bread, cakes and biscuits.

“As Indonesians become more wealthy and urbanised, they will demand more breads, cakes, biscuits and confectionery. Providing wheats tailored to a wide spectrum of premium-paying markets in Indonesia is a sound risk-diversification strategy for Australia,” Professor Kingwell said. ‘The Indonesian noodle market: it’s importance to Australian wheat exports’ is the second in a series of three reports on the current status and future prospects of the Indonesian wheat market.

Download the report findings and recommendations fact sheet and the full report.