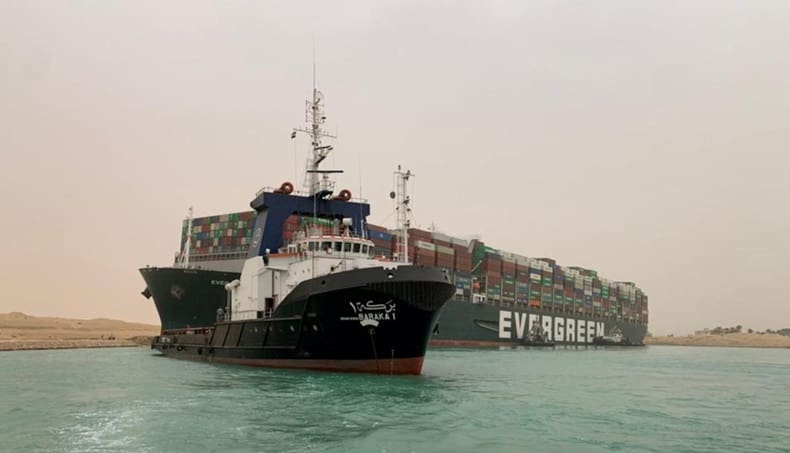 The MV Ever Given has refloated, but its blocking of the Suez Canal will have an impact on shipping for weeks. Photo: Suez Canal Authority

THE Suez Canal is a crucial artery in world trade, but its operation suffered a major setback last Tuesday when one of the world’s largest container ships ran aground and blocked transit in both directions. The Ever Given was passing through the Suez Canal en route from the Chinese port of Yantian to Rotterdam, the largest seaport in Europe, when it veered off course in a single-lane stretch of the canal, about six kilometres north of the Red Sea entrance.

The ship was occupying fifth position in a northbound convoy of 20 vessels when it was reportedly hit by a strong wind gust and dust storm near the village of Manshiyet, causing it to deviate from the intended route. However, the Suez Canal authority has since suggested that technical or human error may be to blame. When it came to a halt, diagonally blocking the canal, the bow was wedged firmly into one bank, and the stern was resting against the other.

At 399.94 metres, the Ever Given is one of the longest container ships currently in service, and is operated by Taiwan-based Evergreen Marine Corporation. Its hull has a beam of 58.8m, a depth of 32.9m and a fully laden draft of 14.5m. The vessel’s deadweight is just under 200,000  tonnes, and it has a container capacity of 20,124 twenty-foot equivalent units (TEU).

A combination of dredging sand and mud from around the ship’s bulbous bow and pulling with as many as 14 tugboats to refloat the stricken carrier had limited success over the weekend. However, following more dredging
and favourable tidal conditions, the Suez Canal Authority announced that salvage crews had been successful in partially freeing the vessel just after 0530 local time Monday.  The Ever Given was completely refloated at 0305 local time Monday, and traffic resumed in both directions shortly thereafter.

Egyptian officials said that the backlog of vessels waiting to transit the Suez Canal should be cleared in around three days, but experts believe the knock-on effects on global trade will be felt for weeks, or even months.  More than 425 vessels were stalled at either entrance to the canal, including at least 60 dry-bulk vessels carrying commodities such as grain, coal and iron ore. The list also includes container ships, oil tankers, LPG and LNG tankers, livestock carriers, general cargo ships, chemical tankers, and car carriers. The blockage is estimated to be delaying up to US$9.6 billion worth of cargo per day comprising $5.1B northbound and $4.5B southbound.

The Suez Canal is an artificial sea-level waterway connecting the Mediterranean Sea to The Red Sea via the Isthmus of Suez. It is 193.3 kilometres long and essentially runs in a north-south direction from Port Said on the Mediterranean Sea to Port Tewfik, near the city of Suez, on the Red Sea. The canal divides the Asian and African continents as well as the Egypt-controlled Sinai Peninsula to its east from the Egyptian mainland to its west.  The canal took 10 years to construct and was officially opened on 17 November 1869. It provides a more direct and faster route between the North Atlantic Ocean and the Indian Ocean, eliminating the need to navigate the long and treacherous alternative around the Cape of Good Hope. It reduces a ship’s journey from the Arabian Gulf to London by around 8900km, or roughly 10 days’ sailing time, and saves up to 800t in fuel consumption.

An extension of the Ballah Bypass in 2014 to 35km in length increased the canal’s two-way capacity, boosting the number of vessels that can pass through the waterway each day from 49 to 97. However, draft restrictions mean some supertankers still cannot transit fully laden, having to offload part of their cargo on to smaller vessels before entering, and then reloading that cargo at the other end.

The Suez Canal saw around 12 per cent of world trade volume navigate its waters in 2020. A record 18,880 vessels traversed the waterway last year, carrying a combined cargo of more than one billion tonnes and a combined value of more than $1 trillion. Approximately 30pc of the world’s shipping-container trade utilises the canal, with fees paid to the Suez Canal Authority totalling $5.6B last year.

Nearly 10pc of total seaborne oil trade, 20pc of global liquefied natural gas (LNG) trade and 16 million TEU passed through the waterway last year. According to the Suez Canal Authority, around 55Mt of grain is shipped via the channel annually. The vast majority of the grain traffic originates in the US, Europe and the Black Sea regions, and enters the canal via the Mediterranean Sea on its way to destinations in the Middle East and Asia.

Data out of the US last week revealed almost 768,000t of US-inspected grain was on its way to Asian customers via the Suez Canal. Around 80pc of that was corn, 60pc of which was on six vessels destined for China. The other corn destinations were Indonesia, Saudi Arabia and Jordan. The remaining 20pc was a cargo each of sorghum, soybeans and wheat destined for China, Bangladesh and Djibouti respectively.

The suspension of traffic through the narrow waterway has intensified problems for container shipping lines. They were already facing disruption and delays in supplying retail goods to consumers due to the coronavirus pandemic and pricing anomalies that have emerged in the global freight market in recent months.

The impact on energy markets is likely to be mitigated for a short time by subdued demand for crude oil and LNG as a result of the pandemic and the traditional low season. Additionally, stockpiles that have built up across the globe over the past 12 months will provide a short-term buffer. The Sumed pipeline can also pump 2.5M barrels of crude oil per day across Egypt from the Red Sea to the Mediterranean Sea.

The uncertainty of passage meant dozens of bulk carriers, oil tankers and container ships have already rerouted via the Cape of Good Hope, adding substantial cost and more than one week to most journey times. Just a week into the crisis and the effects on global trade and sea-freight rates have been building. However, freeing the vessel so quickly has avoided an exponential escalation in global shipping costs across almost all categories.