More animals on feed lifts demand side of equation

WE ARE often well-versed on how much grain Australia produces each season and with good reason: the inter-annual supply swings are the primary drivers of price.

The demand side of the equation, particularly domestic feed demand, is often put aside as a function of the supply, with relatively low fluctuation between seasons.

However, few years of incremental increase will have a significant impact on Australian grain’s balance sheet.

Let’s take a rudimentary look at how the Australian feed demand has grown over the past five years, and its impact, by focusing on the four key feed demand sectors.

Across the grain-dependent feed industries of feedlots, piggery and poultry, we have seen substantial increases in the number of head these sectors are processing each year.

Table 1, referring to cattle feedlots, pigs and chickens, depicts the absolute change in head and slaughter numbers and a rough estimate of this impact on feed demand. 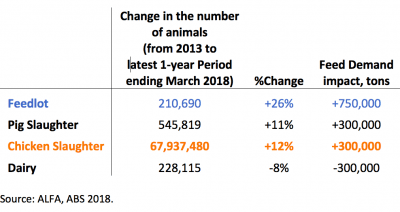 The other large feed sector to consider is dairy, which has been the ugly duckling of the feed industry. Australian Bureau of Statistics (ABS) figures indicate roughly an 8-per-cent reduction in dairy cow herd, which translate to an estimated decrease of feed demand of 300,000 tonnes.

Across the four sectors, the overall change in feed demand has increased by more than one million tonnes since 2013.

This includes protein meals that are commonly supplemented with grains in many of the rations but, given grain making up the bulk of rations, the demand increase will largely be satisfied by wheat, barley and sorghum.

Next time we meet a cow, pig or chicken, we should thank them for their positive contribution to the Australian grain market. 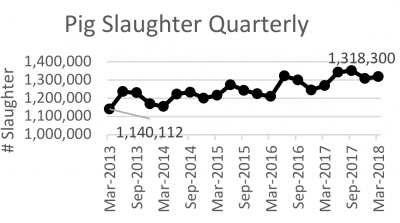 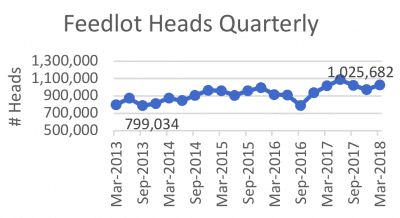 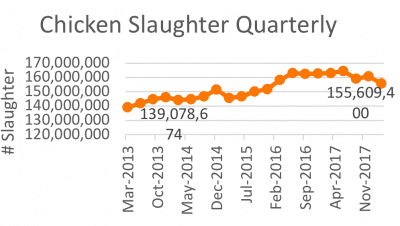