AUSTRALIAN mungbeans’ enviable reputation for quality is proving a strong point in a world market impacted by the coronavirus outbreak in China and import restrictions in India. “I thought the Chinese were going to be extremely standoffish about coming in and buying a lot of product. But, mungbeans being part of Chinese medicine and health food may help us in the long run,” he said.

“Coal and iron ore will certainly be affected because the factories have stayed closed. They were meant to open up this week but they haven’t as the government has told the people to stay at home.

“However, as far as the actual volume of mungbeans they will import, I think it will stay because it has that health food and Chinese medicine status and it has gained a lot of popularity over the years.”

Commenting on the mungbean export market to India, Mr Hunt said there was still uncertainty over Indian government import restrictions, but he was optimistic there would be access for Australian product again this year.

“India has been relatively consistent in the last few years with releasing the import quota of 150,000 tonnes from all origins. That’s the volume importers are allowed if they have a licence to import,” he said.

“That 150,000t could be spread over 6000 importers. Everyone might end up with a small licence. If they only get a small licence they might be more inclined to go for something like an Ethiopian origin.

“The bigger importers, if they get a bigger licence, they are the ones who tend to want to bring the Australian product in, hold it and put it out in smaller lots to maximise their profits.

“I expect them (India) to issue that licence again in June as they have for the past few years.”

Mr Hunt said Australian mungbeans would continue to be the most sought after in the world largely due to Australia’s reputation for high quality standards.

“The quality grade is quantifiable in a laboratory setting. This is super important because an exporter can know exactly what grade that product is going to fit into prior to it leaving the country, or very soon after. That way, if there is a quality problem steps can be taken to alleviate it,” he said.

“Understanding those parameters, understanding what markets take what quality, is absolutely key. That is what leads into the reputation of Australian mungbeans.

“The reputation is hard won, but it literally adds value to our product. We are getting much higher prices over our competitors because (buyers) trust our product.”

Mr Hunt said the world’s mungbean buyers had a positive perception about Australian mungbeans, “and perception is half the job done”.

Mr Hunt said another factor in Australia’s favour was its proximity to markets in Asia and the sub-Continent.

“We can get the product to the market quickly. Transit time to Jakarta is nine to 14 days. Ports in China – we can be there in 17 days. Even transhipment ports, we are there in 23 to 28 days,” he said.

“We can get it from harvest, processed and delivered overseas in a really timely manner so the product we are delivering is fresh, fit for human consumption and has a really good reputation.”

On the down side, Mr Hunt said one of the main constraints for the Australian industry was the inconsistency of production which cost it momentum in the marketplace.

“We’ve produced 150,000t of really good product in the past. The world market soaked it up without any problem. But, droughts and floods that bring about inconsistent production really hurt us and let our competitors get in the door,” he said.

Mr Hunt said grower confidence had historically been a big issue in the mungbean industry, but in recent years that had been turned around dramatically. 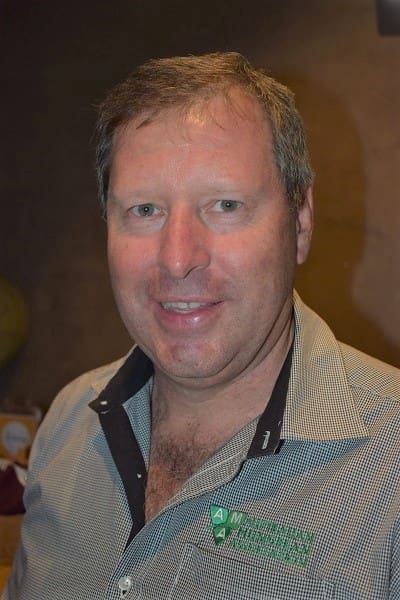 “The Australian Mungbean Association over the last 10 to 20 years has made huge inroads to get confidence back into the mungbean industry so growers are confident to plant mungbeans as their mainstream crop,” he said.

AMA president, Mark Schmidt, told the conference the industry had been very successful at raising the acceptance of mungbeans to “a permanent and prosperous fit in farming rotations”.

“We don’t hear the word “mongrel beans” anymore, they are now “money beans”,” he said.

“Growers are planting mungbeans on a regular basis, year-in, year-out, and are growing the crops better. We can put that down to better agronomy, newer varieties and the desire to maximise the return of any crop they put in the ground.”