No hike in Indian wheat tariff good news for Australia

NEWS from a Reuters report that India has shelved its plan to double its tariff on wheat to 40 per cent is likely to support Australian wheat prices.

The story said government sources had indicated that India would not lift its tariff from 20pc at present, and that India expected imports to make up the shortfall in domestic production for the third year in a row.

While the Indian Government has imposed and hiked tariffs on pulses in recent months to bolster prices paid to its farmers, market sources have said India’s wheat stocks have been deemed too low to be able to absorb a tariff hike.

Market Check head of strategy, Nick Crundall, said the key factor in the decision to drop the plan to increase tariffs was that previous production estimates for their wheat crop were looking increasingly unlikely.

“Estimates that were once forecasting a 100-million-tonne (Mt) crop are now pulling back to 93-95Mt, depending on the source,” Mr Crundall said.

“The issue with this is that their ending stocks, and therefore their stocks-to-use levels, are historically low, which is a concern for a government controlling over 1.3 billion people.

“It’s easy to see that India will need to incentivise imports and not push them away, unless they want to risk having almost no wheat left going into next season.”

Mr Crundall said Australia was likely to be one of India’s key suppliers, as shown in export data of recent years, though not its biggest by volume. 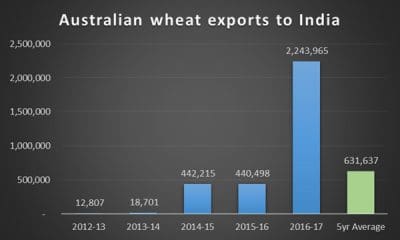 Mr Crundall said Australia’s reduced surplus from last year’s harvest as compared with the 2016 one had built a premium into Australian exports and, on price alone, Ukraine looked like being India’s volume supplier.

“Our exports to India can be impressive when our price, comparative to competing origins like Ukraine, makes it sensible for them to buy from us,” he said.

“Australia will see export demand from India, as they prefer our quality for blending purposes, so we’d expect to see this demand filter through accordingly.”

Indian voters are scheduled to go to the polls next year.

Trade sources have said the Modi Government had had to heed the electoral weight of farmers, who were now harvesting and selling their wheat crops, against city-based consumers.

“India has been taking about raising their tariffs, despite the lower crop. That stems from speculation that they will not want imports that will depress prices in an election year because that would displease farmers.

“Clearly, the situation must be getting worse, and they are realising that there are more bread consumers than farmers.”