A DISAPPOINTING cereal harvest in northern Europe has worsened the EU’s grain and fodder supply situation, and caused the EU Commission to relax some of its regulations surrounding land use. 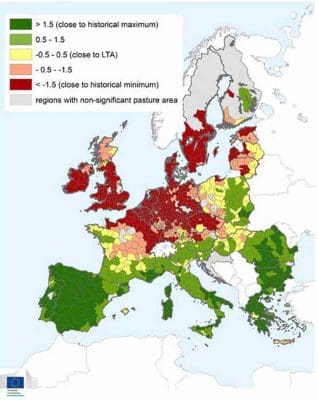 Much of northern and western Europe has below-average pasture reserves following two hot and dry months. Click to expand

Almost all of Western Europe experienced drought, a heat wave, or hot and dry conditions in July and August, with pastures from northern France to Ireland to areas east of Germany all recording growth close to the historical minimum.

Wheat and barley yields in the Baltic States, Scandinavia, United Kingdom and parts of Central Europe are all tracking at below average, while maize yields from France to Poland are also well down.

As a result, EU prices for feed and milling wheat have risen by around 30-50 per cent since May, and barley values have also climbed.

A presentation by the EU agricultural director general to the EU’s agriculture and rural development committee on August 30 said derogation, or easing of legislative restrictions, tied to greening rules had been enacted to allow fodder production on fallow land.

Also, EU farmers impacted by drought are eligible to apply for “de minimis aid” of up to €15,000 over three years, and can now also apply for funding to pay for up to 100pc of the cost of restoring agricultural production potential, such as reseeding pastures lost in the fierce summer conditions.

Last month, the EU agreed to allow some land fallowed as ecological focus areas (EFA) to be harvested, grazed or cut for hay or silage, and to be sown to winter crop.

EU administrators are also looking to minimise the use of force majeure being called on contracts which cannot be filled as a result of heat and drought.

Australian trade sources say a shortage of grain and fodder in Europe is likely to translate to strengthened demand for Australia canola, and may result in some sales of malting barley.