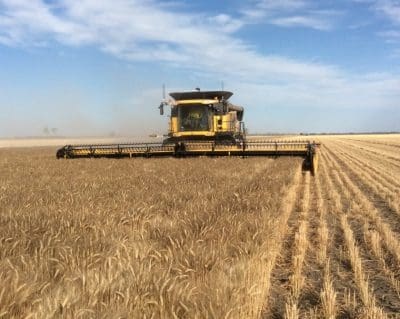 EASTERN Australian domestic wheat and barley prices are at premiums to world parity which will keep most of the NSW and Queensland wheat to be harvested in 2017 from export.

Beef feedlots, and other intensive industries such as pig and poultry, have largely fuelled wheat and barley premiums over sorghum, which has bleak prospects for early planting as the dry in Queensland and northern NSW continues.

“They are at the stage where crop potential is going backwards, crops are being fed; growers will get the crop off first, and market it second,” Mr Hosie said.

Harvest of eastern states’ new-crop wheat and barley is well under way in Central Queensland, and moved to the western Downs and northern New South Wales over the hot weekend past.

A small plus for the current season was that crops which escaped frost damage, though poor-yielding, may still mature with adequate grain size.  The growing season had been tough since the outset and crops in the north had not set themselves up for huge yields.

“The crops are going to be quite light, but the quality should not be woeful.”

“We could be blessed with H2 or better.”

“You need bigger-kernel barley, so that is an added consideration.”

Australia’s barley harvest will start in early October, and sources say many of the drought-stressed and badly frosted crops will have already been grazed off or baled.

NSW barley with better yields prospects on slopes and southern plains will be harvested in late October and November.

Mr Hosie suggested protein premiums may be paid in container markets, but even high-grade milling wheats might return more in the domestic feed market.

He said market talk of grain being shipped from South Australia to Brisbane had been sufficient to cap south-east Queensland grain prices in the short term.

Last week, prices delivered January to southern Queensland’s Darling Downs were bid to growers at A$347 per tonne for wheat, $335/t for barley, and $298 for sorghum.  Hot weekend weather saw values on Monday advance a further A$5-10/t. 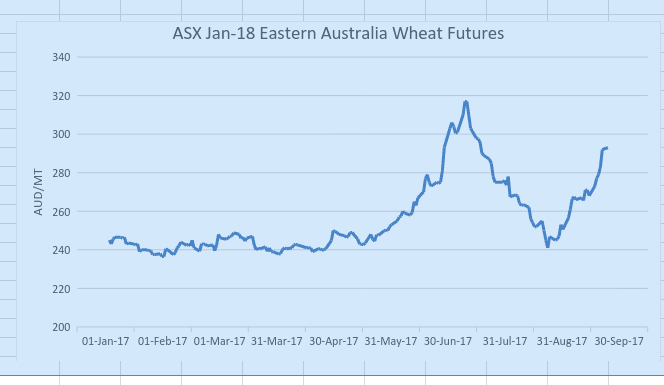 Mr Kelso said while cereal export business out of NSW and Queensland has slowed down over recent weeks, barley and wheat cargoes were still booked to load out of Victoria during September and October.

“There is likely to be some new crop export out of southern and Central Queensland – notably chickpeas – but the majority of cereals are likely to be needed for domestic consumption.

“I can’t see that there is going to be any substantial exports of wheat and barley out of the north till this time next year.

“The more likely scenario is you could get some shipments of grain, particularly barley, from South Australia and Western Australia; the market is pricing for barley to move from a long way south.”

“It is so strong it could continue to have a big pull across southern NSW into Victoria this harvest, and probably through most of next year.”

What has tempered market strength has been the ability of grain from South and Western Australia to make its way into NSW and Queensland markets.

Mr Hanrahan said last week’s pricing made it cost-effective on Friday to drag grain from Port Adelaide zone to the Griffith region where wheat and barley is consumed in feedlots and other intensive animal industries.

The possibility of South Australian feed grain being shipped into Newcastle was also stacking up.

“We are getting close to where the market may be capped.”

Trade sources have said only small quantities of new-crop Hard and Prime Hard wheat ex east coast ports has been booked for early shipment, with Taiwan, Vietnam and Japan among the likely customers for protein grades.

“Our export performance will decline into harvest, because the east coast is so overvalued relative to export parity.

“Premiums are flat; wheat is wheat, and it’s pricing into the domestic feed trade.”

Eastern Australia’s barley area has dropped in recent years because of increased plantings of higher-paying crops especially canola, but also including some pulse crops such as lentils and chickpeas.

“China is going to have to go to South Australia and WA to get its fill this year. “

“People are doing the S&D and saying that barley could be at parity to wheat; it is quite staggering, given the volume of barley produced last harvest.”

Australia’s barley demand for local malt processing is seen at around 800,000t per annum.  Once local malting demand is satisfied, most barley on the east coast will be consumed in Australia’s domestic feed market at prices in excess of export parity.