Over the thirsty paddocks… 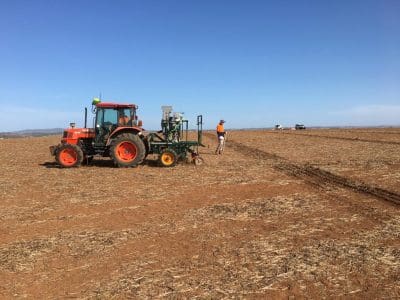 Planting of trials at Callington southeast of Adelaide.

ON THURSDAY last week, the Bureau of Meteorology (BOM) provided an insight into the weather experienced across the country in the previous three months and released their latest three-month outlook.

It has certainly been a summer of extremes with heatwaves, dust storms and bushfires experienced across much of the continent, particularly the eastern states, and then, for parts of northwestern Queensland, unprecedented floods in February.

The temperature summary for the December to February period revealed that Australia endured its hottest ever summer, breaking the previous record set in 2012/13. The mean summer temperature was at least 2ºC above the 27.5ºC benchmark that the BOM considers normal, based on the 30 years from 1961 to 1990.

Early last month the BOM confirmed that January was the hottest month ever recorded in Australia. The mean temperature across the country of 30.8ºC was 2.9ºC above the 1961 to 1990 average. Maximum and minimum temperature records were broken across the country, and the Queensland town of Cloncurry endured 43 days in a row in excess of 40ºC.

In terms of rainfall, a massive part of southern and central Queensland and northern New South Wales experienced their lowest registrations on record. Those districts that didn’t post a record were very much below average. The shrinking Australia sorghum crop is undoubtedly a reflection of these statistics.

Whilst the rest of the Australian winter crop belt traditionally has a winter dominant rainfall pattern, some summer rainfall is quite normal. That has not been the case for the South Australia grain grower this summer where the entire state, save for a small pocket in the lower south-east, recorded below average or very much below average rainfall. The story in Western Australia was much the same.

The hot, dry trend is set to continue for much of the continent according to the BOM’s latest three-month outlook. All districts east of a line from Darwin to Port Lincoln on South Australia’s Eyre Peninsula are expected to have a drier than average autumn (March to May). The Western Australian grain belt is likely to receive average rainfall for the same period.

The BOM suggests that warmer than average autumn days and nights are very likely for almost all of the Australian landmass. They also predict that there is more than an 80 per cent chance of being warmer than the median for both days and nights for most of the country.

Time is running out fast for the winter cropping regions of Queensland and northern New South Wales. These regions have a summer dominant rainfall pattern, and grain growers in these regions rely on the summer wet season to replenish the soil moisture profile ahead of the traditional winter drought. This moisture is critical for the winter crop ahead.

Most districts have now had three consecutive summers where rainfall registrations have been significantly below average. Rainfall, in the two winters sandwiched in between those summers, has also been well below average.

The amount of rain required to fill the soil profile varies depending on the success, or otherwise, of last season’s cropping program. A considerable part of the region in question failed to plant a crop last winter. Some of these areas may only require 100mm of rainfall to join up with the moisture which may be as close as 30cm from the soil surface.

Those who planted a crop, and it managed to struggle into the spring, and even to harvest, will require much more rain as the subsoil moisture level will be much lower down the profile, and therefore more precipitation will be required to join up with the existing deep soil moisture.

The required summer rains could still come, albeit a little late. It has happened many times in the past. Nonetheless, the further we go into autumn the lower the chance. The soils are parched, and there is little or no ground cover, so the first rains need to be slow and steady. However, with unseasonable and extreme weather events now the norm, the biggest fear is that the long dry spell will finish with a big wet.

It is far too early to make a call on the impact of the dry summer on New South Wales and Queensland winter crop production forecasts. Australian farmers are a resilient bunch, none more so than the north western New South Wales grower, many of whom have only had one crop in the last five years. If sufficient rain arrives, the crop will be planted.

Open demand ahead of their harvest is diminishing, and the market inverse will make it extremely difficult for Australia to compete in the third quarter of the year without a lot of financial pain. Asian millers have reportedly turned to Argentina for wheat, and there still hasn’t been a Saudi Arabian feed barley tender since November last year.

Western Australian ASW wheat bids fell around $15/t across the week, and the northern feed market mirrored that move, down $15/t and trading at just under a spread of $100/t. Feed barley bids in the west fell by about $11/t week-on-week. The delivered Darling Downs price closed the week down $15/t and is trading at a spread of $106/t over the west.

On the other hand, delivered Darling Downs sorghum values were relatively unchanged. The discount to feed barley is now in to $20/t, and the wheat spread closed the week at $50/t. Again, the diminishing spreads are a reflection of lower sorghum production as a result of the parched summer. However, the resultant increase in demand for Western Australian grain will only absorb a small portion of the long positions currently sitting in the hands of the domestic trade.