AUSTRALIA’S chickpea exports dropped to a new low of recent times at 15,023 tonnes in September, according to the latest export data from the Australian Bureau of Statistics (ABS). 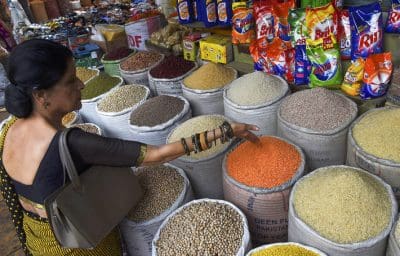 Retail pulses in Pakistan: Photo: Food and Agriculture Organization of the United Nations

Pakistan was the biggest market for the month, taking 7858t.

Nepal on 2289t and the United Arab Emirates on 2033t were Australia’s second and third-biggest September chickpea markets respectively.

The September tonnage has dropped 47 per cent from the August figure, and 85pc below the 98,791t shipped in September last year, prior to December, when India a tariff on imported chickpeas to support domestic prices.

Meanwhile, prices for chickpeas in Australia have rallied, as traders look to cover their positions for shipments up to February, mostly to Pakistan for arrival before Ramadan.

Prices for prompt delivery to Darling Downs packers are heading for $850 per tonne, and were expected to rise as shorts, some caused by the recent collapse of Special One Grain, looked to cover commitments.

“It goes to show how little product there is,” another trader said.

“People have sold to Bangladesh, Pakistan and Nepal, and traders who are short are scrambling.”

Traders said prices have risen by as much as $100/t in the past month.

One trader said India’s neighbours were “bemused” that Australian prices were so high without their volume buyer in the market.

“The markets look to India for direction, and it’s not giving us any,” another trader said.

“India has been buying chickpeas, but only from WTO-exempt countries like Tanzania and Myanmar, which are not subject to tariffs.”

“Our buyers think our prices should be falling and they are not.

“We are an island of high prices because of the east-coast drought, and growers aren’t selling.”