LAST WEEK’S announcement that The Manildra Group is importing a cargo of Canadian wheat has drawn criticism from varied quarters within the Australian grain industry over its impact on Australian grain prices, and a perceived biosecurity risk. 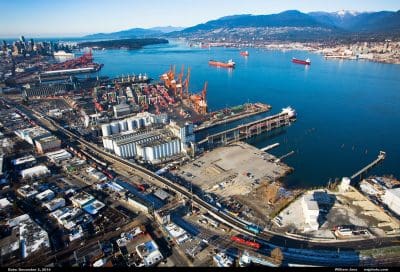 A cargo of Canadian wheat loaded at the Port of Vancouver last week, and is now on its way to Port Kembla.

Critics include CBH Group, the major supplier of grain to drought-stricken eastern states in the past year, and Mallee grower Georgina Warne, who on the eve of Saturday’s federal election started an online Stop Wheat Imports petition intended for delivery to the Federal Minister for Agriculture and Water Resources.

“The Western Australian grain industry is unique in its ability to provide grain that is free of pests and disease due to our strong biosecurity system,” Ms Peake said.

“CBH now expects to see a decrease in demand for higher protein wheat from the east coast,” Ms Peake said.

Some of that has gone into supplying the east-coast market, with around 2Mt shipped in the past year, and more on the shipping stem.

Grain Producers Australia chairman and Victorian grower Andrew Weidemann said the lack of national grain stocks data made it difficult for a company the size of Manildra to feel secure about being able to source all the grain it needs domestically during a drought period.

“We’re disappointed that we have to import grain, but we understand,” Mr Weidemann said.

“These companies need grain to survive.

Sources have said a number of growers and traders with wheat to sell were now irked that the Canadian wheat would put price pressure on their positions in a global wheat market which had already fallen around AUD$100 per tonne since harvest.

In her petition, Ms Warne has claimed the landed price of imported grain is higher than local grain of equal quality.

“Consumers with import permits will use imported stocks and the threat of further imports to keep their foot on the throat of us Australian farmers, leaving us and the trade trying to export into the competitive world market, while imports come in through the front door.

“The stakes are significant.  We are potentially importing the biosecurity issues that currently give Australia a preference in certain grain markets.”

Ms Warne said weeds and diseases including Canadian thistle, karnal bunt, and GMO corn and soy could all be present in imported grain.

“The risks are all on the farmer, but the choice seems to have been made for us. This is our chance to have our say.

The cargo from Canada loaded and sailed from Vancouver last week, and is scheduled to arrive in Port Kembla on board m.v. African Pheasant in mid June.