China is in the market for US corn, but low fuel prices have crushed demand from US ethanol plants. Photo: Iowa Farm Bureau

CHINESE purchases of US grains have been scant since the coronavirus epidemic hit the country, despite the Phase 1 trade agreement being signed by both nations back in January. China has pledged to buy an additional US$12.5 billion worth of agricultural goods in 2020, nearly half 2017 level of US$24 billion.

Many analysts have been expecting China to wait until the second half of the calendar year to ramp up its purchases of US grains, once new-crop supplies come online, and prices are traditionally more competitive.  However, there were signs last week that China may be about to “walk the talk”, as recent price declines have brought US export values more in line with offerings from competing origins. Additionally, logistics issues and supply challenges across the globe are interrupting global supply. This has provided China with a valid incentive to engage the US exporter to spread its geographical supply risk.

The United States Department of Agriculture (USDA) announced last Friday that private exporters had reported sales of 756,000t of corn to China for delivery in the 2019/20 marketing year. This is the biggest corn sale to China since July 2013. Arrival must be before the end of June 2020, well before the US new-crop slot.

Further private exporter sales across the week included 110,000t of soybeans for delivery to ‘unknown’ destination’ in the 2020/21 season. Sales flagged “unknown destination’ typically mean China is the purchaser, and that was confirmed by the trade late in the week.

The USDA also reported deals totaling 340,000t of hard red winter (HRW) wheat for delivery to China in the 2020/21 marketing year. This is the first Chinese purchase of HRW from the US since late 2017, just months before the US-China trade war got serious.

US corn futures plunged last week, despite the significant corn sale to China. The continued slide in crude oil values is a far greater challenge for global corn consumption. As coronavirus continues its global invasion, countries are increasing domestic and worldwide travel restrictions, sapping demand for fuel. The price of Brent Crude has tumbled from a 2020 high of $68.91 per barrel on January 6 and from $51.90 at the beginning of March to close last week at a 17-year low of $26.98. That represents a loss in value of 61 per cent year-to-date, and 48pc for the first three weeks of March.

Cheap oil is undermining the viability of the ethanol industry. The US accounts for 56pc of global ethanol production, and manufacturers are feeling the pain as margins on the corn-based fuel slumped to record lows.  The US mandates that ethanol is blended into the nation’s fuel pool. However, despite falling prices, gasoline demand is being eroded by the national travel restrictions put in place to curb the spread of coronavirus.

Plummeting fuel prices are reducing demand for US corn in a worldwide slump in ethanol production. Photo: Phoenix Equipment

Most of the industry is bleeding red ink right now, and there is no end in sight. Many ethanol plants in the US have slashed production over the past week or been forced to cut staff. Some have even closed to cut their losses until margins recover, whenever that may be!

Ethanol production in the US uses around 140 million tonnes (Mt), or roughly 40pc of total corn production. Reports say the US ethanol grind may decline by 20pc. That equates to an annualised
decrease in US corn disappearance of 28Mt and a significant increase in US ending stocks.

But who really knows how much production will decrease as demand is not being driven by price? The longer the national shutdown goes on, and it will be longer than most in the US care to admit, the bigger the decrease in demand.

This is just the US equation. The low oil price will have a similar impact on ethanol demand and production in all jurisdictions, particularly those who mandate an ethanol inclusion in fuel or are major exporters of ethanol for fuel use. Non-US corn use for ethanol production is around 60Mt, and corn is not the only feedstock. Brazil is the world’s second-biggest ethanol manufacturer, at 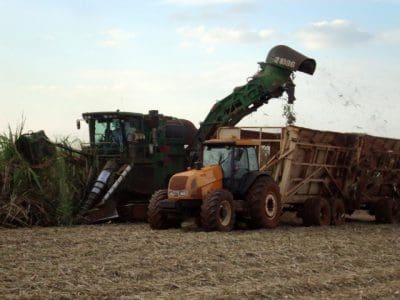 With world oil prices so low, Brazil is not expected to be making ethanol with its sugarcane this year. Photo: Embrapa

28pc of global production, and sugar is its primary raw material. In other countries, wheat, and even barley, are used, but the quantities involved are minor relative to the size of the global crops. Ethanol yield from cereals also tends to be inferior to both corn and sugar, making the financial equation even less appealing with the price of oil so low.

All this erosion of corn demand comes as Brazil and Argentina are forecasting near-record corn harvests, despite the continued dry weather. Local agencies have maintained their production estimates, but parts of Argentina have certainly seen a yield reduction, and the dry is slowing the planting of the second corn crop in Brazil.

Adding to the global feedgrain glut is a potential record wheat crop in 2020/21. The International Grains Council has pegged it at 769Mt, but market analysts are quoting numbers as high as 775Mt.  Production that high means the world is building stocks, even before any potential demand destruction by coronavirus.

With the 2020 winter-crop planting season almost upon us, and plenty of uncertainty in global markets, now is the time to be looking ahead. The Aussie dollar has done its work for now, and there is good incentive to sweep the old-crop cupboards bare. And if the soil-moisture profile has been topped up by good summer rains, a modicum of production confidence may make new-crop cover attractive at current values.