THE Adriana Rose, the third-largest grain vessel ever to be loaded in South Australia, is taking on 74,000 tonnes of wheat and barley in total at Viterra’s Port Lincoln terminal this week. 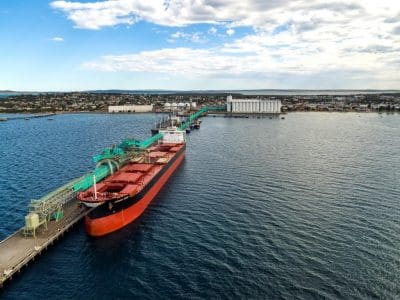 The Adriana Rose is loading wheat and barley bound for the Middle East at Viterra’s Port Lincoln terminal.

The cargo of old and new-crop grain is bound for the Middle East, and will help kick off South Australia’s 2017/18 export program.

Glencore Agriculture is Viterra’s parent company, and its senior wheat trader, Simon Gellert, said the mix of old and new-season grain was headed to the Middle East.

“The cargo has been sourced from Eyre Peninsula growers and is headed to three destinations in the Middle East,” Mr Gellert said.

“Putting together such a large vessel with more than one commodity is a great benefit to growers because it helps create freight efficiencies.”

Mr Gellert said the Middle East was a key buyer of South Australian milling wheat; it is also recognised as the world’s major importer of feed barley.

Port Lincoln is one of the few naturally deep sea port terminals in Australia that can load large vessels like the Adriana Rose, a Kamsarmax vessel which is 229 metres long and has seven holds.