Delegates representing Taiwan’s 15 major flour-milling companies gathered last week to learn about some of the latest developments in the Australian wheat industry, and potential for market growth, at a seminar in Taipei. 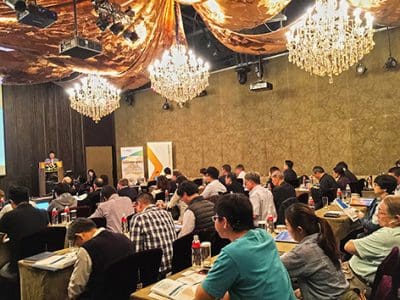 Around 70 delegates attended a seminar in Taipei on Australian wheat.

“We believe there is strong potential to grow Australia’s wheat exports to Taiwan,” Dr Cato said.

“Taiwanese wheat processors are becoming more and more aware of the advantages of using Australian wheat.”

The seminar, built on the success of similar events in 2015 and 2016, which were well received by Taiwanese buyers, and Austrade again arranged a mission of Australian wheat traders and industry representatives.

More than 95 per cent of wheat consumed in Taiwan is reliant on annual imports of around 1.25 million tonnes.

The United States supplies about 76pc of Taiwan’s wheat, compared with Australia at 18pc.

It has a population of around 23 million in an area about half the size of Tasmania, and its citizens consume around 56kg of wheat flour per capita per annum.

The seminars aim to further demonstrate the versatility and reliability of Australian wheat, and to keep industries in key markets updated on developments in the Australian industry

AEGIC is conducting a similar seminar in Japan this week, and another like it in South Korea the following.