The Rio Blanco set a new record over the weekend with the largest ever evacuation of containers, some 1600 TEU, on a single vessel out of Port Adelaide. Acting as a “sweeper”, the ship is now on its way to Malaysia to deliver a cargo of empty containers from Australia to demand locations in Asia. Photo: Flinders Ports Holdings

A SHORTAGE of bulk and containerised shipping paths for new-crop pulses out of southern Australia is limiting the trade’s ability to show bids to growers.

This is despite global markets being very strong for lentils as a result of Canada’s drought-reduced crop, and reasonable demand for chickpeas and faba beans.

The ongoing shortage of empty containers to pack, compressed turnaround times and limited windows for shipment has fueled increased interest in bulk shipments, and unbooked slots are limited as Australia prepares to export a string of mainly canola and wheat vessels.

Chickpea crops in Central Queensland are thought to be less than 14 days away from the header, and will kick off Australia’s 2021-22 pulse harvest.

Yield prospects for all crops are expected to be good, as evidenced by ABARES lifting its estimates for chickpeas, lentils and lupins in its latest Australian Crop Report released on September 7.

Largely because of Western Australia’s excellent season, ABARES has lifted its lupin estimate 21pc to 748,000t.

ABARES does not estimate Australian faba bean production by state, but last week lifted its forecast for the national crop to 442,000t from 249,000ha.

Trade sources have told Grain Central container packers located at or near port are jagging more business than those in the heartland of grain-growing areas in the current environment.

“Normally we have a week’s worth of containers on site; some lines are giving us maybe two days with empty containers, so someone who’s only half an hour from the port has an advantage,” one trader said.

“If we’ve only got one rail service per day going to the port, that might give us six hours to fill the container and get it back on the train.”

Traders based up-country are still doing business, but are having to engage fee-for-service container packers at or near ports to help them meet tighter-than-ever shipping schedules.

Pulse traders, who have traditionally exported a much larger proportion of their sales in containers than cereal traders, are particularly hard hit.

While some markets like Bangladesh, Egypt, India and Sri Lanka are well set up to receive bulk pulses, others like Pakistan and the landlocked Nepal are serviced by containers.

However, some in the trade believe the rise in container freight costs is slowing, and that shipping companies will be able to clear the backlog of full and empty containers sitting in transshipment ports like Singapore and Malaysia’s Port Kelang.

This backlog, along with an undersupply of 20-foot containers in global circulation, is being blamed for boxed Australian pulses being slow and expensive to export to anywhere other than North and South-east Asia.

Traders report one shipping line is suspending services to the Indian sub-continent for the entire fourth quarter as it waits for transshipment backlogs to clear, and only one line is offering a regular service.

Sweepers, vessels which carry only empty containers, are still regular visitors to Australian ports as shipping companies service manufactured exports coming mostly from China, and its call for as many empties to be returned as quickly as possible.

Trade in delivered-packer markets on the Darling Downs of southern Queensland and in northern New South Wales is deathly quiet because of the shortage of empty containers to pack, and space on vessels sailing to the Indian sub-continent.

Trade in new-crop chickpeas appears to be focused on accumulation for bulk vessels, which are expected to start loading next month.

China’s demand for containerised and bulk Australian sorghum out of Queensland and northern NSW continues to absorb most of the available empty boxes, and bulk slots which can wriggle in among the wheat bookings.

As with last season, Bangladesh is likely to be the first big bulk customer for new-crop chickpeas, and accumulators are bidding for product delivered to CQ ports.

The delivered Downs market is nominally quoted at around $600 per tonne, little changed from last month, and may rally once sorghum exports slow and local chickpeas start to filter into packing plants late next month.

“You can’t get containers, and we’re starting to see more chickpea vessels on the shipping stem,” Mr Furse said.

The market for faba beans has changed little in the past month, with new-crop delivered port prices at around $390/t.

Demand from Egypt is evident, but the container issue is limiting forward sales from grower to trader, and within the trade.

“Australia will probably do a couple of vessels out of SA, and maybe some out of Victoria too.”

“Prices are a bit all over the shop due to uncertainty over container freight.”

The average national yield is forecast at 1.8t/ha, not far off the 1.9t/ha achieved in last year’s record crop. 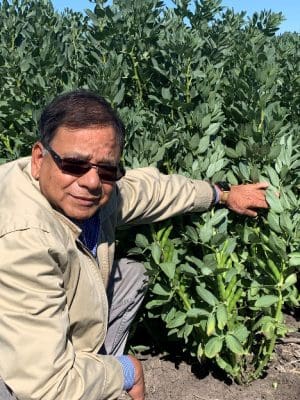 Faba bean variety PBA Ayla has been released this month and is pictured with breeder Dr Kedar Adhikari. Photo: University of Sydney

Australian growers in northern NSW and southern Queensland have a new variety available for next year, FBA Ayla.

Available through Seednet, FBA Ayla was developed through the breeding project which involves the NSW Department of Primary Industries and the University of Adelaide, and is supported by the Grains Research and Development Corporation.

PBA Ayla was bred by Dr Kedar Adhikari from the University of Sydney’s Plant Breeding Institute at Narrabri.

Trials show FBA Ayla has out-yielded all current faba bean varieties by at least 4pc, and it is a suggested replacement for PBA Warda and PBA Nasma.

Lentil prices have surged and retreated in the past month, with up-country packer rates rising $200/t in the last half of August to hit $1150/t, but dropping around $100/t in the past two weeks.

Underlying strength in the market is coming from Canada’s smaller crop and India’s reduced tariff, and Mr Krahe said these factors have not been able to counter the impact of huge freight costs and uncertainty.

“Now that shipping lines have voiced their concerns about fourth-quarter shipment, the price has fallen.

“The market is remaining fairly firm, but the appetite from the trade is starting to wane because we can’t ship it.”

Mr Krahe said prices in the past month have encouraged a run of grower selling.

“We’re seeing more inquiry now that the prices have softened, but we’ve run out of shipping space.

“Normally we’d be selling out into January by now, with October, November and December fully booked up, given the crop looks good.

“Right now, we’ve sold a quarter of October, and nothing beyond that.”

Mr Krahe said demand from India for lentils was modest at present, but may pick up in the next month or so once the full impact of drought on Canada’s export surplus becomes evident.

Victoria and South Australia grow the vast majority of Australia’s lentils, and despite some dry patches, both are expected to produce a big and good-quality crop provided frost or excessive rain do not hinder late growth.

Indicative new-crop prices for mungbeans are steady, with No. 1 grade at around $1200/t delivered Downs packer, $1100/t for processing grade, and $1000/t for manufacturing.

As with the current shipping year, China looks like being the major destinations for new crop, which could be a big one.

“NSW is probably a candidate for a larger crop than usual because of the savings on fertiliser growers can make by planting mungbeans instead of sorghum,” Mr Hunt said.

Coupled with ample soil moisture in parts of NSW, it means the state looks set to plant its first spring crop in years, and a summer crop too if the season shapes up.

Mr Hunt said growers were watching the positive market signals, and were ready to respond now that manufacturing grade was holding steady at $1000/t or more.

“The overseas market looks good, and conditions here, plus the Indian market opening up, mean we might be in for a big one.”