Eli Sausage inspects a crop of May-planted Kyabra chickpeas at Emerald in central Queensland. The crop has had one watering and could be harvested as early as late September. Photo: Renee Anderson

PREMIUMS for early harvested pulses look like the bright spots in a softened market where big tonnages are expected when, in October, the first chickpea and faba bean harvest since 2016 not affected by drought gets going in earnest.

Forecasts for an abnormally wet spring have chickpea, faba bean and lentil growers and traders cautious about over-committing tonnage for early delivery for fear that fungus issues and damp harvest conditions will make contracts hard to fill.

Yield prospects for winter-grown crops look to be average to above-average in most districts.

Following two to three weeks of showery weather, fungicides are now being applied to chickpeas in particular, and spraying will accelerate if damp conditions prevail once the weather starts to warm up next month.

Chickpeas are trading in the nearby delivered container terminal (DCT) Brisbane market at $680/tonne for 2018-19 crop and $710-$715/t for 2019-20 crop, with modest demand from Bangladesh, Nepal and Pakistan propping up volume.

The middle ground between new-crop bids and offers is sitting at around $605/t DCT for October-November, and $10-$15 less for January onward.

Bangladesh appears to be the destination most interested in buying bright-coloured early new crop, which will be supplied out of central Queensland (CQ) when harvest gets going late next month at the earliest.

In the up-country delivered-packer markets, November-December prices are sitting at around $510/t Narrabri in northern New South Wales, and around $550/t delivered Darling Downs in Queensland to reflect the difference in freight costs to Brisbane.

New-crop markets have dropped by up to $10/t in the past month.

AgVantage Commodities principal Steve Dalton said Bureau of Meteorology predictions for a wet spring had growers and traders concerned about over-committing in case the crop ran into quality or timing issues.

Other sources have said a repeat of 2010, when a wet finish to the growing season made early delivery of high-quality almost impossible, was feared, and was limiting grower and trader willingness to forward sell.

“If it started to get wet now, you’d see significant wash-outs on contracts due to concerns about quality.

The wet spring of 2016 required most growers to make multiple applications of fungicide, which became difficult to source as the growing season ended.

Resellers are believed to have enough fungicide available to satisfy demand, and some growers have stocked up ahead of spring.

“At this point in time, there’s enough fungicide out there.”

The past three growing seasons in northern NSW and Queensland, Australia’s main desi-type chickpea-growing areas, have been in dry to drought conditions, resulting in small planted area, low yields and generally good quality.

Mr Dalton said growers in these regions had a lot riding on this season, and did not seem prepared to risk having to wash out contracts if a slow and wet harvest prevented them from delivering against contracts.

“People can’t afford to make many mistakes this year.”

Spikes in the market for new crop are likely to appear if traders have positions to cover, and sufficient chickpeas of good quality are hard to find.

Australia is expected to produce up to 700,000t of chickpeas this harvest.

Crops in central and parts of southern Queensland are now flowering and setting pods.

This is roughly double the level of demand seen in the past year from the key markets, in India’s absence, of Bangladesh on around 150,000t and Pakistan, 85,000t.

The United Arab Emirates, plus secondaries including Nepal and the United Kingdom, have collectively bought about 100,000t.

India stopped buying significant volumes of Australian chickpeas when it introduced a 60-per-cent tariff in 2018 to protect prices for its domestic crop.

East African chickpea exports are exempt from the tariff because of the developing economy status they hold with the World Trade Organization.

Ethiopia, Kenya, Sudan and Tanzania are exporting the crop they are now harvesting to markets including India, which is dampening interest in booking new-crop Australian product.

However, sources say the large size and bright colour of Australian desis make them a preferred option for Bangladesh.

A tough winter for Queensland and largely a kind one in NSW have industry thinking CQ will produce 60,000t, southern Queensland 120,000t and NSW 450,000t including kabuli-type.

The retreat of drought conditions in south-eastern Australia has all but killed domestic demand for faba beans, and export bids have weakened in response to Egypt’s continued absence from the Australian market. 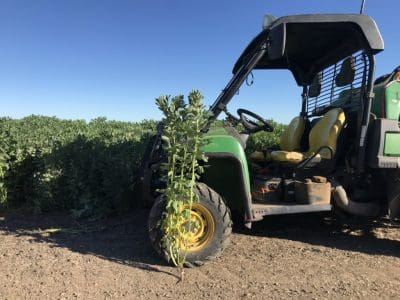 Faba bean crops in NSW and parts of southern Queensland are well advanced but would benefit from more rain to help with pod fill. Photo: Jeremy Bryan, Willaroo, Boggabilla

“The South Australian and Victorian grower isn’t selling at these levels,” one trader said.

Weather permitting, new-crop shipments out of Brisbane will start in October and roll south with harvest.

“The export market for fabas is the best market at the moment; there’s no domestic market for them,” Mr Dalton said.

Egypt is the world’s biggest market for faba beans by far, and its economic and food security concerns caused by COVID have stopped its importing of pulses for processing and re-export, which typically buoys its demand for the pulse.

A hot and dry spring in England has reduced the United Kingdom’s export surplus of fabas, but the Baltic states are getting into harvest now and are expected to have a significant tonnage to export.

Middle East destinations, perhaps with some support from Egypt, are expected to buy new-crop Australian fabas.

“It depends on spring and how hot it gets, but we should see harvest from mid-October, and they can be delivered and packed from second-half October to early November.

“That’s when there should be a premium in northern NSW before the southern NSW, Victorian and South Australian harvest starts.”

Trade sources have said faba bean price levels are about average over the long term, but are less than half of what the domestic market got up to when feed for sheep and cattle was in very short supply during the drought.

“We haven’t seen much activity in the market,” Mr Teague said.

“There was a bit of grower selling in May, and it slowed down when things dried off in June and July.”

Recent rain in Australia’s major lentil-growing areas in South Australia and Victoria has underpinned yield prospects for the crop, with earliest paddocks likely to be harvested in late October.

“We’ve only just stopped worrying about dry weather and frost down here.”

If lentil crop development stays on track, new-crop containers will be shipped from early November.

Canadian farmers and traders are believed to be selling their new-crop lentils aggressively into the nearby market as its harvest gathers pace.

Australia’s mungbean harvest is over, and market interest has transferred to new crop.

Spring planting in Queensland will start shortly, and the earliest new crop will be available for November to January shipment.

Most of Australia’s mungbeans are planted in December-January and will be available for shipment from April onward.

Indicative DCT bids for spring-planted mungbeans are sitting at $1300/t for No. 1 grade, $1200/t for processing grade and $1100/t for manufacturing, with summer-planted mungbeans for delivery to June at a $100/t discount on all grades.

Traders said the exceptional  quality of  the crop harvested earlier this year, coupled with improved agronomic practices, had made Australian product increasingly popular with China.

On top of flood damage to some of China’s mungbean crop, this has stimulated early interest in sourcing new-crop Australian mungbeans.