Lentil deliveries have ramped up in South Australian in the past week at sites including Plains Grain at Mallala. Photo: Plains Grain

A SLOW start to the southern harvest and variable quality to date is keeping traded volume to a minimum, while in the north, attention is turning towards planting of new-crop mungbeans.

Overall quality of lentils appears to be improving as harvest gathers pace, while the reverse could well be the case in faba beans.

Trade sources say economic uncertainty is impacting a number of counterparties spread from Egypt to Bangladesh as inflationary pressure and currency risk limit appetite for business on both sides.

New-crop trade in chickpeas is unusually thin for this time of year, with widespread downgrading of peas prevalent in most areas.

All prices quotes in Australian dollars.

Container packers on the Darling Downs of southern Queensland are paying around $450 per tonne for CHKPM-grade chickpeas with minor downgrading.

Wilson International Trade broker Peter Wilson said some good-quality new-crop desi chickpeas are being seen among the mostly weather-affected loads being offered to the market.

“A major buyer in Pakistan has had difficulty on different products, and that’s affecting exporters from North America to Europe to Australia,” Mr Wilson said.

“Pakistan has been taking a lot of manufacturing grade, and we’ll just need to workshop that market to see where it goes.”

Mr Wilson said growers with some or all of their chickpeas downgraded due to mould incidence are not in a hurry to sell, and are either harvesting and marketing other winter crops, or busy with summer crops.

“They have enough other stuff going on.” 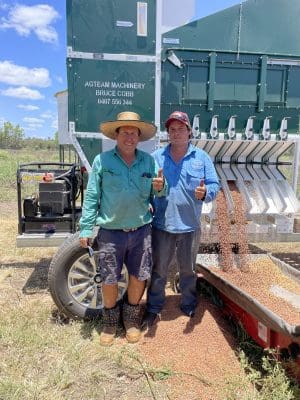 At Clermont in CQ, Ross and son Mitch Faint put their weather-damaged chickpeas through their new grader this year to avoid a pricing cliff face. Photo: Bruce Cobb

Australia’s main northern chickpea harvest is largely over, and some area has been abandoned due to excessive weather damage.

However, some growers are getting their seed graded to avoid the pricing cliff face that exists between CHKP1 and CHKPM grades.

While full-fat soybean meal is around double the protein of the aforementioned pulses, it costs more than double the price, and is therefore making headway into some domestic rations.

Faba bean prices have fallen by up to $50/t to around $330-$400/t, depending on grade and location, and amid lacklustre export demand from Egypt, the world’s biggest importer.

“There are areas in the South East of South Australia that have chocolate spot, but we haven’t seen what that has done to quality; it might be on the leaf and not on the pods.”

“It’s a funny year; we don’t know what quality is going to be like, and we don’t want to have product coming in and it not being right.

“Also, we can’t get the amount of containers we were doing three years ago.”

“Normally we plan a pretty big schedule for now, but we’ve pushed most of it into January-February.”

Larger Nugget-type lentils have held value in the past month at around $780/t, while prices for the smaller Nipper and Hallmark types have weakened to around $740-$750/t.

This may change now that the lentil harvest has gathered pace in South Australia after a slow start.

However, it is yet to hit peak volume in Victoria, where harvest is running several weeks late due to spring rain prompting prolonged flowering, and making paddock access difficult on some farms.

Mr Munday said indications are that wrinkling evident in early harvested crops may become less of a problem now that a welcome run of dry weather has occurred.

“Quality’s okay on what’s coming in now, but there’s a big part of southern NSW and Vic still to go.”

Lentils are usually stored on farm by farmers who do not like the prices offered to them at harvest, and their up-country and port values rarely show signs of harvest pressure.

“There’s not a rush with people selling them.”

Queensland growers are preparing to plant what could be a record mungbean area into ample subsoil moisture.

The ideal planting window for mungbeans opens around Christmas, and runs into late January, and the rain that thwarted winter-crop harvesting will be the one that sets up a strong early start for Australia’s biggest summer pulse.

“They’re chewing through stocks from Argentina and Brazil in China, and we’re probably only getting into serious mungbean planting now,” Mr Neilsen said.

“Now that growers have sorghum planting behind them, they’re starting to think about mungbeans.”