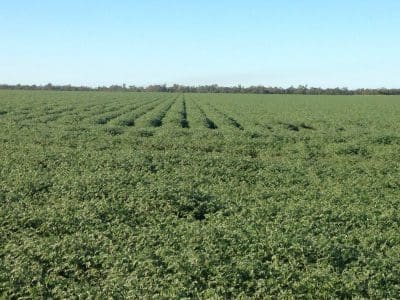 A 2016 chickpea crop in southwest Queensland.

A repeat performance is highly likely in 2017-18, as world cereal prices fail to excite.

According to Avant Agri co-principal, Malcolm Bartholomaeus, the switch out of barley has been inevitable for some years, and mirrors a trend set by traditional major world barley producer and exporter, Canada.

“This change has been a long time coming.  Canada realised it was not economic to grow feed barley to deliver into the export market; they could not put it on a train, send it to port, get it to an overseas destination and make any money from it,” Mr Bartholomaeus said.

“The reality is Australia can’t either.  It can’t grow feed barley to tip into a world market that pays what they do for feed grains in general and feed barley in particular.”

Canada over 20 years has built a world’s-best lentil and canola export industry which has switched profitability in former barley areas, particularly in remote western Canada.

The parallel with inland plains country in eastern Australia cannot be lost; these are areas which pay high per-tonne freight to port or mill.

A higher-unit-value-lower-yielding crop can marginally trim the disadvantage of high freight.

The expansion of area came because growers recognised the economic and agronomic benefit of pulses in rotation with cereals.

In the two recent years in particular, a large number of southern growers tried a new pulse, nearly all of whom were rewarded with yield and profit, which came as a result of strong price and ideal growing conditions across eastern Australia in spring.

Pulse area expanded to the point where it was hard to find a grower without a neighbour growing pulses, and the outstanding 2016 yields nearly all pulse crops recorded could only buoy confidence in growing them.

At double or triple what wheat and barley offered per tonne, chickpeas and lentils were the rock stars of the 2016 harvest.

“The 2016 yields of wheat and barley did make them profitable, even though prices fell around 20 per cent from our budget at planting time.

“However legume prices mostly held right through the season, and with favourable spring conditions yield was at least 70 per cent up on what we predicted at planting time last year.

“That was the key driver of profit.”

Industry had knowledge of increased planting in 2016 giving rise to hopes for a crop around 1.4Mt, allowing for the impact of diseases of wet weather — such as ascochyta blight and botrytis grey mould — which were furiously managed throughout.

As usual, Queensland and northern NSW growers did the heavy lifting, with expanded area from regular growers and support from first-timers.

“The 2016-17 season saw a lot more chickpeas grown in central and southern NSW than we normally would expect,” Special One Grain CEO Jaimee Carrigan said.

“Chickpeas were an attractive crop rotation in places like Cowra and Hillston, which we don’t traditionally associate with growing desi chickpeas.  The combination of crop rotation benefits and pricing can work surprisingly well, even under relatively dry conditions.”

While barley is agronomically renowned as the toughest winter crop — it can scrounge for moisture and nutrients — other crops nowadays are more often bumping barley from rotations in which its place was previously assured.

“There is a lot less barley grown now in Walgett than there ever was, because of the reduction in sheep numbers.  Graziers previously used barley as a drought feed for sheep,”  Ms Carrigan said

And while barley area has fallen, the Canadian experience of growing it in profitable areas near demand is likely to be repeated, which will underpin barley area on NSW slopes country.

While pulse cropping had been some small part of the farming system in all mainland states from the 1980s, its broad contribution to whole-farm budgeting gained pace through varietal and disease research and through growers learning how to grow the pulses with confidence.

The contribution to export earnings of pulses, compared with wheat, canola and barley, current year and 5 years ago, is shown in the table below. It could be a guide to their relative place in farm financial performance.