UNITED States corn exports between March and May were exceptional according to the latest United States Department of Agriculture’s (USDA) World Market and Trade report, trimming further the burden of corn stock, both world and US. 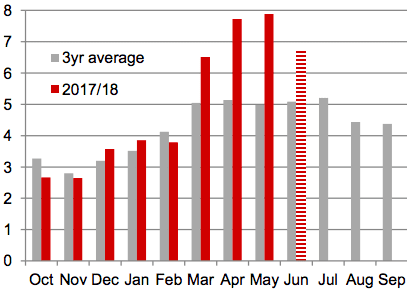 Not only were larger volumes shipped to traditional markets such as Mexico, Colombia, Japan, and Korea, but also to second-tier markets Vietnam, Spain and, among other North African countries, Egypt.

USDA foresaw strong shipments continuing for the rest of the year ending 30 September, which could result in annual exports of 61Mt, the second largest ever year for US corn exports.

US corn price the cheapest origin

Corn free on board (fob) export bids were down about 10 per cent over the past month, reductions totalling about 20pc since early May.  US corn has remained the cheapest origin.  FOB bids according to the report recently were:

USDA attributed the strength in US sales to slower than normal pace of shipments from Argentina and Brazil, along with Brazil’s much smaller second corn crop, safrinha, which is grown late in the season in that country.

World and US corn ending stock is set to continue to decline, according to the USDA report.