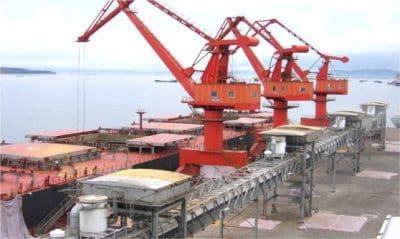 Unloading grain at the Port of Yangjiang in China’s Guangdong Province.

The revised IMP focuses on the minimisation of risks from items of quarantine including weed seeds and pests such as certain beetles, weevils and snails.  It has been welcomed by grain traders.

“The key to the rewrite was demonstrating the critical control points through the various stages in the supply chain – starting with producers, storage and handling and exporters,” Mr Russell said.

“Suppliers must carefully select stocks to be sure that levels of pests are nil or minimal.”

In the revised IMP, China’s quarantine inspection body recognises that Australia uses a table to outline shipping maximum tolerances which are used to manage the task of minimisation.

“It’s been a long journey to get this right,” Mr Russell said.

Market access for Australian grains into China remains dependent on quarantine protocols protecting shipments from unwanted plant seeds or animals finding their way on board.

The protocols help to give confidence to importers that Australian suppliers are taking responsibility for compliance at every step of the value chain.

The revised IMP provides transparency which assures the Chinese customer that the Australian exporter is confident that grain earmarked for shipment has been checked at points along the supply chain and found to comply with maximum tolerances.

It has come about through discussions at various meetings this year between representatives from GIMAF, the Chinese Government’s General Administration of Quality, Supervision, Inspection & Quarantine (AQSIQ) and Australia’s Department of Agriculture and Water Resources.

The farm biosecurity program for grains is the starting point of a chain of command which applies internationally recognised quality assurance systems to the various stages of handling grain, through transport and loading to vessel or container for export.

At the shipping end of the chain, it became critical to ensure transparency in the processes used to minimise pests of concern at the point of export.

Authorised officers are the gatekeepers of what grain is loaded for export, and are responsible for ensuring pests of concern do not get shipped with grain at levels which exceed tolerances.

This procedure augments the control points applied elsewhere along the supply chain, as grain traverses from farm through transport and storage to export shipment.

The commencement of ChAFTA two years ago delivered a tariff cut on barley from three per cent to zero.

The importance of China as a market for Australian barley this year cannot be overstated, and because of the bilateral ChAFTA free-trade agreement, Australia is now the only country to have zero tariff access.

This is a significant advantage over other major barley exporters such as Argentina, Canada, France, Ukraine, Russia and the United States.

China’s tariff rate on Australian sorghum and oats, both of which were 2pc prior to ChAFTA, were also cut to zero at the commencement of the free-trade agreement.

The text of the GIMAF document is available here.