RICE, the world’s third-ranked cereal crop, alone among the major cereal foods, is set for increased volumes this year.

By contrast, corn and wheat as the first and second-ranked cereals wheat are both seeing volumes of production, consumption and stock decline this year by a small margin, according to the May 2022 USDA World Agricultural Supply and Demand Estimates May reports.

These contain the first 2022-23 season estimates, and were published overnight.

Trade will be variable across commodities; wheat a record and corn set to shrink as Ukraine corn export declines.

World 2021-22 wheat production, at 775 million tonnes (Mt), is forecast down 4Mt from the previous year, with smaller crops in Ukraine, Australia, Morocco, Argentina, the European Union, and China. Consumption is forecast lower (figure 1). 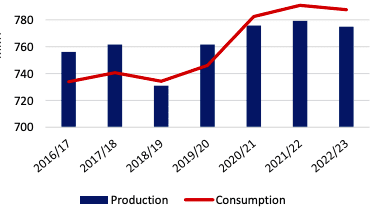 The greatest negative impact is expected to be the Ukraine crop, forecast down by one third to 21.5Mt on anticipated reduced harvested area and lower yields due to the ongoing war with Russia. The greatest recovery in production is Canada, returning to a wheat crop next year of about 33Mt having suffered widespread drought last year (figure 2). 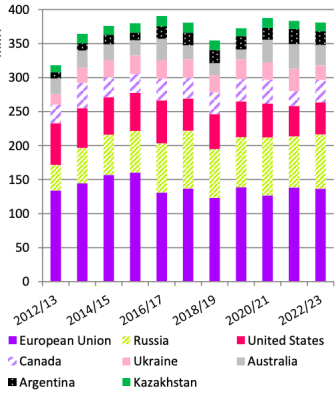 World wheat consumption forecast is down, with lower feed-and-residual use only partially offset by higher Food, Seed, and Industrial (FSI) use.

Feed use is expected lower, especially in Australia, China, and the EU, due to smaller domestic crops.

Food consumption continues to rise due to population growth.

Global ending stocks are forecast down, with smaller carryout in China, India, and most major exporters.

Trade is forecast at a record with stronger imports across Africa, South-east Asia, and the Western Hemisphere.

Global corn production, at 1181Mt (figure 3) , is forecast down 36Mt from the previous year, driven primarily by a cut in Ukraine and the US, but China and the EU are expected to have smaller crops as well.

However, if realised, Argentina and Brazil will again have record production. 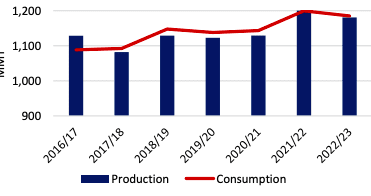 Figure 3. Corn production, globally, next year will fall, the greatest impact from lower crops in US and Ukraine. Million tonnes. Source: USDA

The global trade forecast has fallen in the absence of Ukraine’s exportable supplies.

Consumption, both feed and non-feed uses, is expected to decline very modestly.

Ending stocks are forecast down, led by reductions in China and the US.

By the time the reports were released at US midday central time on Thursday wheat markets, primed with expectations of production cuts had already risen almost 2pc, and made further strong gains during afternoon trade to close the session around 5pc firmer.

“ USDA cut wheat harder than the market was expecting, especially in the US (where) HRW at 590 million bushels was well below expectations,” Lachstock Consulting said in a morning commentary.

Outcomes in corn and soybeans were less decisive.

Lachstock pointed to inconsistencies in the corn balance sheet, USDA aggressively cutting the US corn yield estimate to 177bu/ac, but did not adjust production in Argentina or Brazil, and ‘found’ 8Mt old crop production across minor countries.

It called the report mixed but bullish nonetheless.

Beans were also mixed, and trade was choppy, given that the US numbers were neutral-to-bearish and that lower global old crop stock was supportive.

It noted that the soybean oil balance sheet will continue to tighten in 2022/23.

Rice production, at a record almost 515Mt, is forecast about 2Mt greater than previous year, with larger crops in South and Southeast Asia, including India, Indonesia, Bangladesh, Thailand, and Pakistan.

Global consumption is expected to rise, also a record, primarily in India, China, and SubSaharan Africa.

Global trade is forecast higher with India expected to remain the top exporter, but exports are also up significantly for Thailand and Pakistan. China will be the top importer, driven by record consumption.

Global stocks are down to a three-year low as consumption grows faster than production and China continues to auction its large government stockpile.