Riordan, Semaphore get green light on grain from consumer watchdog 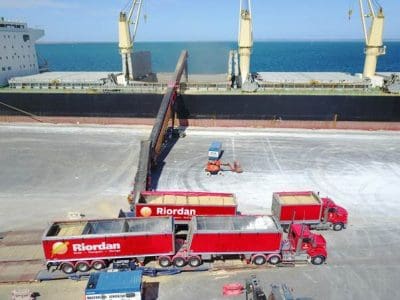 Riordan Grains loads a vessel at the Port of Geelong.

It’s a point that was driven home this harvest by Victorian company Riordan Grain Services, which, along with Port Adelaide operator, Semaphore Grain Services, has been granted exemptions to parts of the Bulk Wheat Code.

The exemption has come from Australia’s consumer watchdog, the Australian Competition and Consumer Commission (ACCC), and means the companies can continue to export grain in the shadow of bulk and container-shipping heavyweights.

“Riordan and Semaphore will both face significant competitive constraint from larger operations. The ACCC’s preliminary view is that it is appropriate to grant exemptions to these smaller players,” ACCC Commissioner, Cristina Cifuentes, said in a statement.

“These relatively new entrants into the market will increase choice for exporters of bulk wheat. The ACCC considers that the exemptions will provide them with greater flexibility to compete with the dominant providers.”

Riordan’s operations at the Port of Geelong compete primarily with the dominant providers of bulk wheat port terminal services in Victoria, Emerald and GrainCorp.

Riordan’s managing director, Jim Riordan, said the exemptions were good news for the company, which by the end of next month would have exported 180,000 tonnes in total of current-crop wheat, barley and corn.

“It’s been difficult to get it to happen, but it’s happened, and the farmers are all for it,” Mr Riordan said.

The company has used its own trucks to transfer grain accumulated at its storage in Geelong to vessels using a mobile ship loader at the public berth.

“What we’ve done has given different commodities to different customers that couldn’t get that grain through the system otherwise.”

The ACCC considers that, in the absence of full regulation under the Bulk Wheat Code, Riordan will continue to face strong competition for bulk wheat volumes from Emerald’s and GrainCorp’s terminals.

The ACCC has invited submissions by Friday, 7 July from interested parties on both the Riordan and Semaphore draft determinations.

The Bulk Wheat Code came into effect in 2014, and regulates bulk wheat port terminal service providers to ensure that exporters have fair and transparent access to terminal facilities.

Where appropriate, the ACCC may reduce regulation at a specific port terminal by exempting the relevant port terminal service provider from certain provisions of the code.

If the ACCC makes a final determination to grant exemptions to Riordan and Semaphore, they will not be subject to a number of the code’s provisions at their respective facilities.

Exempt service providers are still obliged to deal with exporters in good faith and publish information about how capacity is allocated and the current state of the shipping stem; they must also comply with general competition law.