RUSSIA is forecast to be the world’s leading wheat exporter for the first time, surpassing the European Union and the United States, according to the latest crop report from the United States Department of Agriculture (USDA).

Russia’s total supplies for 2017/18 are expected to be record-breaking based on near-record production as well as massive carry-in from the previous year. 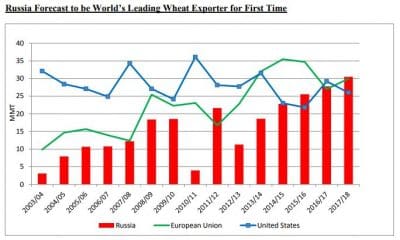 New-crop Russian wheat is competitively-priced against other origins – Australia, Ukraine, and the US.

Russia’s current position in the global market is a large change from a decade ago.

In addition, export competitiveness has improved with investments in infrastructure, specifically efforts to expand port capacity.

The USDA report says Russia’s abundant supplies and low prices in the current year provide an opportunity to compensate for tight supplies in other major exporting countries.

Last year, the US was the world’s largest exporter, aided by abundant supplies and competitive prices.

This year, however, the US crop is projected down significantly and exports are forecast lower, in spite of abundant carry-in.

The EU is projected to have a better crop and larger exports compared to last year.

However, supplies are still expected to be tight relative to the previous two years, when it was the leading exporter by a large margin.

On the global market, the USDA has lowered world wheat production estimates for 2017/18 due to smaller projected crops for Australia, China, the EU, Ukraine, and the US that more than offset larger forecasts for Russia and Turkey.

On the coarse grain market, global corn production for 2017/18 has risen, led by higher plantings in the US.

Global oilseed production is forecast to be a new record of 573.9 million tonnes (Mt).

The soybean production forecast is raised for the US and China and a larger cottonseed projection in India offsets reductions in the United States and Pakistan.

Higher sunflower seed output is projected for Ukraine and Moldova and exceeds reductions in the EU and the US.

A reduction in Australia’s canola crop more than offsets gains in Russia and the US.

Persistent dryness and a current subsoil moisture deficit in a major portion of Australia’s winter crop region contributed to a lower area, an estimated nine per cent drop in wheat yield, and an 8pc drop in rapeseed yield from the five-year average.

Precipitation has been well below average since major sowing operations commenced in May.

The estimated area planted is 12.6 million hectares (Mha), down 0.25Mha or 2pc from last year.

The yield forecast of 1.23t/ha hectare is the fourth lowest in the past 10 seasons.