Figure 1: The Australian Government has evacuated its embassy in Ukraine, and advised all Australian citizens to leave or avoid the country. Source: DFAT

AS RUSSIAN forces advance into Ukraine, citizens are fleeing their homes and businesses and offices are being shuttered.

Among them are grain-handling and oilseed-crushing facilities operated by multinational companies, and the Australian Embassy in Ukraine.

The Australian Government’s Department of Foreign Affairs and Trade (DFAT) yesterday advised there have been reports of explosions in Kyiv and other parts of the country.

Earlier this week, DFAT announced its embassy staff had left Ukraine, which is now in a state of emergency.

Odessa is one of Ukraine’s three major grain ports on the Black Sea, which carries cargoes of Russian and Ukraine wheat, barley and oilseeds to global markets.

Northern Hemisphere futures markets have hurtled upwards this week as the fear of a Russian invasion of Ukraine became a reality, and Australian futures values followed suit in trading yesterday.

With dry conditions for the North American crop already of concern as spring approaches, on top the likelihood of sanctions being imposed on Russia, and shipping disruptions ex Black Sea, global wheat values seem unlikely to soften.

As the world’s largest wheat-exporting nation, Russia is forecast by the USDA to ship 35Mt in 2021-22 (Jly-Jun).

In second place for estimated wheat exports in 2021-22 is Australia on 25.5Mt, followed by Ukraine on 24Mt and the US on 22Mt, while the EU collective is pencilled in for 37.5Mt.

NATO members and their allies, including Australia, have been swift to impose sanctions on Russia as punishment for its push into Ukraine territory, they are not expected to be joined by Russia’s wheat customers.

The biggest is Egypt, which into the 1980s was Australia’s major customer, a position shared mostly in recent years by Indonesia and China.

Russia’s other volume customers include Iran, Iraq and Syria.

As with Egypt, their diplomatic and economic positions, and need for food security, mean none of them are expected to impose sanctions on Russian wheat imports.

“Hence it is unlikely that they will sanction Russia.”

However, access to shipping lanes, particularly the Bosphorus which links the Black Sea with the Mediterranean, could become an issue for Russia in its bid to get wheat to export customers.

“It could well be that UN/NATO blocks access through the Bosphorus, which will stop it, or they cut Russia off from the US-dollar payment system.” 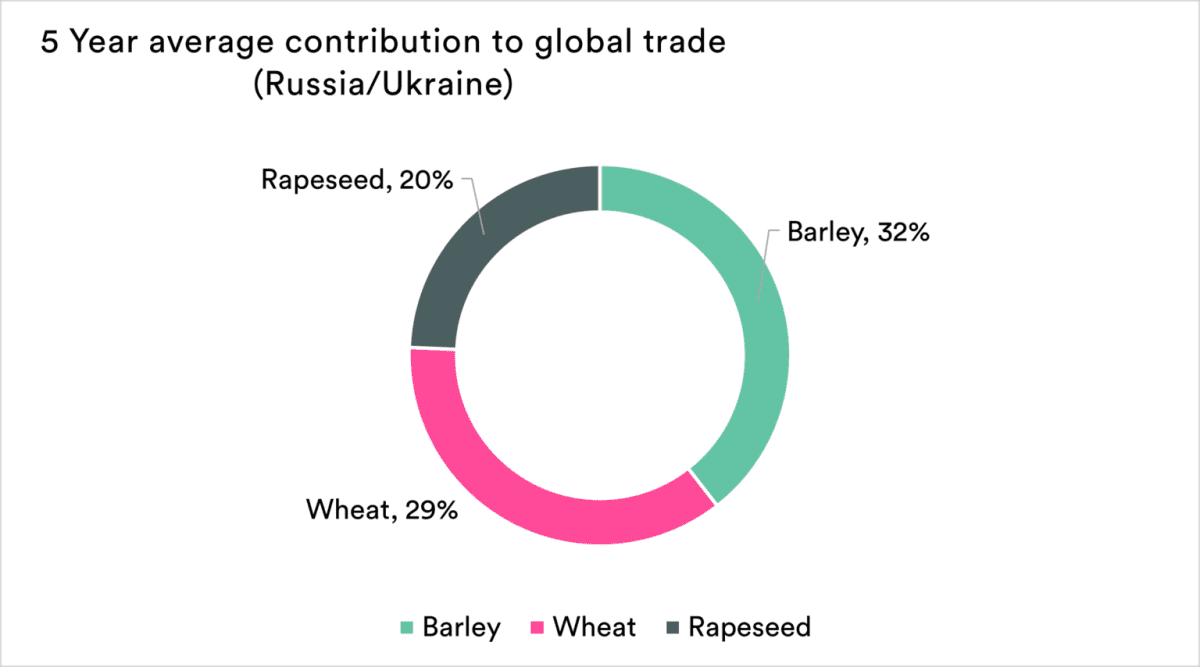 In commentary released today, Rabobank agricultural analyst Dennis Voznesenski said the loss of access to all Black Sea wheat exports last occurred in October 1914, when the Ottoman empire blockaded Russian wheat from reaching its allies, the UK and France.

“Chicago wholesale wheat prices rose 45 per cent from October 1914 to February 1915,” Mr Voznesenski said, adding that impacts this time around could be even more severe.

“Firstly, the world’s reliance on Black Sea wheat is now higher and, secondly, wheat stocks in…non-Black Sea export regions are far lower compared with the average coming into this crisis than they were in October 1914.”

“In the short term, this would not prevent the expected high pricing, but would fundamentally change global wheat flows into the future.”

Mr Voznesenski said the conflict could change trade flows and usage of wheat, especially in the 160Mt or so, or 20pc of the world’s wheat, used for feed.

“This is where substitution is likely to occur to compensate for a potential 60Mt of wheat exports annually no longer coming out of the Black Sea region.

“China’s hunger for 50-60Mt of grain imports annually, largely for feed, could potentially shift from its current origins of South and North America and instead be supplied by Russia’s 45-50Mt grain export surplus.”

Most of the world’s multinational grain-trading organisations have investments in grain terminals in Ukraine, and Grain Central understands at least three such companies overnight suspended operations in Ukraine indefinitely.

In an article published on the Thomas Elder Markets (TEM) website today, TEM analyst Andrew Whitelaw echoed the sentiment of the grain industry in Australia.

“It’s horrible to think of our friends struggling in Ukraine,” Mr Whitelaw said.

For some, that means family too.

“While we don’t want to see the humanitarian disaster that will follow from this disaster, there is still a market to report on.”

“The grain price in Australia has not reflected the moves on a like-for-like basis.”

Basis is the difference between the Australian cash price, and the relevant US wheat futures contract.

“If we look at our basis in Australia, the CME rally of the past week has really pushed it down to extreme lows.

“If the Australian wheat basis was at typical levels, then our wheat price would currently be north of $500.”

Mr Whitelaw said this did not necessarily translate to gouging by the trader.

“The basis levels have been extremely low for some time, but this current crash in basis can be attributed potentially to a few factors.”

They include the Australian trade being surprised by Russia’s actions, and having had very little time to react to events, and logistics.

“Australia is still working through last year’s monster crop in order to get it out of the country.

“Most ports are at capacity.

Mr Whitelaw said the impact on Australian pricing will depend on the severity, extent and length of the invasion.

“The shutdown of the Azov and the rocket attack on grain vessels are really bringing the worst fears forward; that is a full logistical breakdown.

“If this event continues and exacerbates, further rises are inevitable.

“Putting a number on it is impossible.”

If Ukraine and Russia cannot keep shipping grain, even for a couple of months, Mr Whitelaw said “huge ramifications” can be expected in global markets.