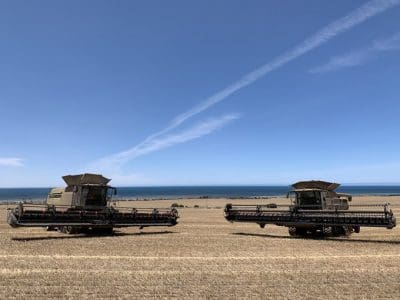 COOL WEATHER at the start of last week slowed the South Australian harvest, which has now seen 3.2 million tonnes of grain delivered to the state’s major bulk-handler, Viterra.

In the week to Sunday, growers delivered 338,938t, with all three regions seeing an increase in receivals as weather warmed up later in the week.

As well as receiving grain, sites in Viterra’s Western and Central regions are preparing and moving grain for loading on to vessels at the company’s Port Giles, Port Lincoln, Thevenard and Wallaroo export terminals.

Viterra Eastern region operations manager Jo Klitscher said harvest activity in the Loxton and Apamurra areas was starting to wind down, but the state’s south-east was still busy harvesting.

“While barley continues to make up the majority of deliveries, wheat is increasing, and growers have been very happy with our dynamic binning service for both commodities,” Ms Klitscher said.

Harvest has gathered pace in the Southern Mallee and Wimmera districts of Victoria over last week, and Viterra said its Dooen site was the latest to extend opening hours until midnight on Sunday to ensure growers could deliver ahead of the forecast hot weather.

Deliveries to Viterra’s Victorian sites increased over last week, with receivals being mostly barley and canola.