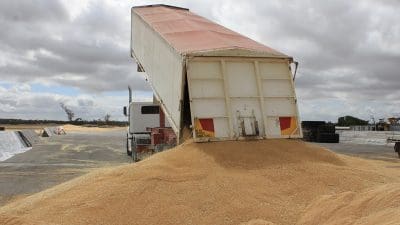 IMPROVED weather conditions in the week to Tuesday saw 395,979 tonnes of grain delivered to Viterra sites in South Australia and western Victoria.

Deliveries were predominantly wheat, and the weekly total was up nearly 60,000t on the figure from the previous week to push the receival figure for the harvest to Tuesday to 3.6 million tonnes.

The pace of harvest has eased in Viterra’s central and western regions, while the eastern region’s south-east areas are building towards their peak.

“As expected at this point, some sites in the region are slowing down now, but the south-east is moving into its peak, so receivals in those areas are really picking up,” Ms Klitscher said.

“Growers have been commenting that harvest on the Eyre Peninsula is about two or three weeks ahead of previous years, which could see them enjoying some time off over Christmas,” Mr Pratt said.

“Last week was again busy for sites in the southern Eyre Peninsula, with our Cummins, Port Lincoln and Tumby Bay sites all recording consistent tonnes throughout the last week.”

Viterra Central region operations manager Jack Tansley said harvest was drawing to a close, but the region’s larger sites would remain open, while smaller sites have begun to close for the season.

“We had 13 sites open last week, and as harvest finishes up, our larger sites will remain open and ready to receive growers’ tail-end deliveries or their on-farm stock.”