SAUDI Arabia’s Saudi Grains Organization (SAGO) has bought 660,000 tonnes of feed barley at US$277.65 per tonne cost and freight. 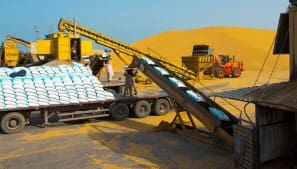 The previous tender, in November, was booked at prices in the mid $230s.  Today’s news is a 20-per-cent lift in values, which is good for growers around Australia and reflects globally strong feedgrain prices.

Australia will likely become the number one supplier to Saudi Arabia this year.

Compare that to its position as number five or six over the past decade with major suppliers EU, Russia and Ukraine alongside lesser-volume suppliers Canada and Argentina.

Australia’s “normal” low ranking in Saudi arose because of the pre-eminence with premium barley sales to customers in China, Australia’s number one destination over decades. Both rankings reflect the relative returns in each trade.

Australia has a lucky break because this year it’s the global feedgrain markets that have attracted mounting premiums, and the timing has coincided with Australia having plenty to sell.

“With what’s happened in the corn market, over the past three or four months, Australian barley has become the cheapest feed grain,” Advantage Grain pool manager Chris Nikolaou said.

“A rising tide lifts all boats.”

In the absence of China as the primary destination, Australia is now sending barley all over the world.

“To be over-reliant on one buyer, and the fact that so far this year we have been able to have a lot more destinations on the sales books, makes for a much healthier marketplace.”

“It looks like the pricing in the Saudi business was based on Australian this time.”

Black Sea origin possibly could have been competitive for some cargoes into Red Sea ports but it would seem tight supply and risk from Russia’s export duty could have made shippers hesitant to make firm offers.

WA and SA barley has capitalised on strong shipping demand over the first half of the marketing year, and eastern-states producers have benefitted as well.

“It’s great for the growers in Victoria and New South Wales who have had a cracker season; they get the best of both worlds – big crops and big demand.”