AUSTRALIAN farmgate production is on track for a record-breaking $66.3 billion year, thanks in large part to a near-record $35.5 billion winter crop in 2020–21, according to ABARES’ June quarter 2021 Agriculture Commodities report released today.

The report shows how the agricultural sector has navigated the uncertainties and challenges posed by COVID-19 and changes in the international trade landscape.

ABARES acting executive director Dr Jared Greenville said the value of agricultural exports was forecast at just under $47 billion in 2020-21.

“ABARES has revised both the gross value of production and the value of exports up by $400 million from earlier estimates,” Dr Greenville said.

“This is due to strong domestic livestock prices, and because the pace of Australian grain exports has been faster than expected after harvesting the second largest winter crop on record.

“We have seen an impressive turnaround in wheat, barley and canola shipments. Particularly for barley, this result demonstrates the resilience of supply chains, the benefits of a diversified production base and access to a diverse range of international markets.”

The near-record $35.5 billion gross value of crop production in 2020–21 was boosted by Australia’s second-biggest winter crop on record and relatively high world grain and oilseed prices.

Grains, oilseeds and pulses accounted for 50 per cent of the value of crop production and horticulture for 34pc. “Prospects are positive for the next winter crop which has seen record high area planted, but it’s very unlikely to see two record years back to back,” he said.

Grain, oilseed and pulse exports have all rebounded significantly since the drought in 2019–20. Dr Greenville said prices for most of Australia’s major export grains were forecast to fall.

The world wheat price is forecast to fall in 2021–22, which reflects increased supply and lower demand for feed wheat as corn supply is forecast to increase.

Higher production for Argentina, the European Union, the United Kingdom, Morocco, Ukraine and the United States is expected to more than offset reductions for Australia and Canada.

Production in the Russian Federation is forecast to be similar to last year’s record, reflecting higher area planted.

Corn and barley prices are expected to remain high but fall from current 2020–21 levels.

The world price of corn is expected to decrease in 2021–22 and world coarse grain production is forecast to increase to a new record.

However, relatively tight coarse grain supplies and strong demand are expected to continue to support prices at historically high levels.

Oilseed prices are forecast to remain historically high in 2021–22 due to strong global demand and tight inventories.

The world canola price is forecast to increase as consumption outstrips production.

Dr Greenville said the impact of mouse plagues had been locally devastating, but on the national scale damage had been reasonably limited.

“The worst impacts have been to stored grain and hay across parts of Queensland and New South Wales, although high mouse activity has been observed in many parts of the wheat belt,” he said.

“The worst of the mouse plague is likely to be behind us as cool and wet winter conditions slow breeding rates. There does remain a risk of a resurgence if winter is warmer than expected.” 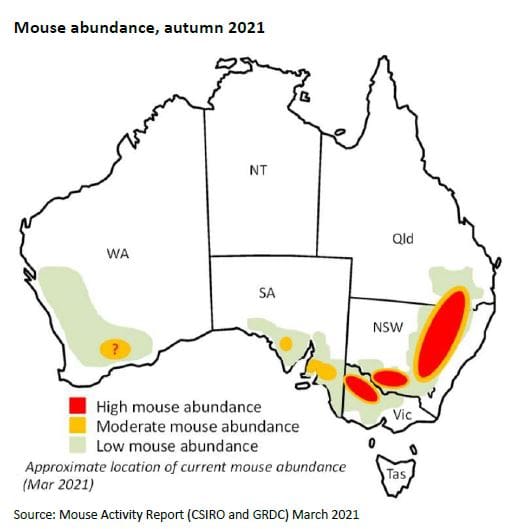 Improvements in the economic outlook for major economies for 2021–22 and a recovery in the price of synthetic substitutes will likely result in increased demand for cotton and wool.

The increased availability of irrigation water in Australian cotton growing regions has led to the price of water falling from the highs reached during the drought.

Due to an increased supply of water and high international cotton prices, near-record plantings for irrigated cotton are expected, along with high yields in 2021–22.

The rainfall to support dryland plantings is less certain this far out from planting in September and October, but plantings are expected to rise slightly from 2020–21.