LAST YEAR’S Australian winter-crop production was the lowest in more than a decade, after drought in the eastern states cut production to well under that required for domestic demand. 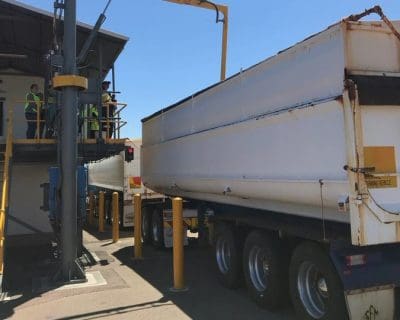 Prospects for the 2019/20 season in Australia are now worse, as the unseasonably dry August and September extends into October, sapping the early season yield potential and bringing crops to harvest much earlier than usual in many regions.

According to the latest Bureau of Meteorology (BOM) climate update, rainfall is likely to be below average across most of the country for the remainder of 2019, with high chances of a drier-than-average October and November in particular.

It predicts that daytime temperatures are very likely to be above average across Australia for the remainder of the year, with a spell of hot weather likely in early October.

These are precisely the conditions experienced in many districts over much of the past week, and this will hasten the ripening process in many regions.

The BOM expects that night-time temperatures will generally be warmer than normal, and that a positive Indian Ocean Dipole (IOD) is highly likely to remain the dominant climate driver until at least the end of spring.

This gloomy outlook does not bode well for some late yield relief, and further reductions in production estimates are highly likely as the remaining crop moves swiftly toward harvest.

Soil-moisture levels have been below average across most of Australia’s farming area for most of the year, and the crop in many regions has simply run out of gas.

This fate has been borne out in the area that has already been dropped for hay across all states.

The warm weather over the past week will no doubt force growers to make a further assessment of the yield prospects on crops still standing, and weigh that up against potential returns being offered by an extremely buoyant hay market.

Production estimates are always a moving target, and this is no more apparent than in the current season.

There is a wide variation in production estimates being tossed up by the trade and market analysts, but one thing is undoubtedly common for them all: it will be less tomorrow.

In late September, national wheat and barley production was sitting at around 16.5 million tonnes (Mt) and 8Mt respectively. One week into October and it is a struggle to get the wheat crop above 15.75Mt and the barley crop above 7.75Mt, such is the decline in that very short period of time.

Falling production in both South Australia and Western Australia over the past few weeks has been the biggest contributor to that decrease.

So how will this affect trade flow over the next 12 months? Like last season, the market will be driven by the requirements of the domestic consumer.

As national production decreases, the exportable surplus will decrease, and any need to be competitive into Asia, for anything but inelastic Australian demand, will diminish accordingly.

In the 2018/19 season, demand for grain in Queensland, New South Wales and Victoria far outstripped supply.

This resulted in around 3.4Mt of grain, primarily wheat and barley, being shipped around the coast from South Australia and Western Australia to eastern-state ports.

This was supplemented by around 300,000t of rail movements and as much as 500,000t of road movements to east-coast consumers.

In addition, the east-coast supply deficit paved the way for the approval of milling wheat imports from Canada.

The grain was shipped into Port Kembla and then taken by train to Manildra’s Shoalhaven starches facility at Nowra, a distance of around 70 kilometres.

While national production will be down year on year, the production landscape has changed.

Total wheat and barley production in Western Australia will be down by as much as 5Mt, and production of the same grains in the eastern states, including South Australia, will be up by around 3Mt, based on the aforementioned production estimates.

Manildra will continue to buy locally, and has already booked more shipments out of Canada to meet its quality requirements.

How the trade reacts at harvest will be the most interesting market dynamic.

With drought on the east coast last year, many bought up big at harvest, believing ownership would be king, only to see cash prices and basis drop dramatically in early 2019.

One would expect traders’ approaches to be a little more measured this harvest, especially with Western Australian values currently well above export parity, and the delivered-Queensland markets priced at, or close to, full execution from the west.

For the eastern-state grower, it will be all about capturing the domestic premiums without taking on an undue amount of counterparty risk.

This means that the highest price may not always be the best price.

Many Victorian, NSW and Queensland producers will have existing end-user relationships, and cash flow will be generated by selling into the domestic market direct off the header and then filling on-farm storages.

South Australia will be a little different.

Pricing for growers on the Eyre and Yorke peninsulas will be focused on coastal movements through the ports to NSW and Queensland.

The Adelaide-zone grower may find an incentive to truck production east; better prices may be found at silos in Victoria, or even NSW, than at the local silo, especially at harvest time.

It may seem a long way to go, but from the right locations, the higher price should more than make up for the additional freight cost.

If the grower doesn’t move the grain east, the trade will, so it is definitely worth doing the analysis and banking the spread if it is available.

Agricultural production globally is at the whim of the weather.

The one thing we do know is that drought-breaking rains in Australia are a day closer.

In the meantime, the relatively small Australian crop is quickly getting smaller.