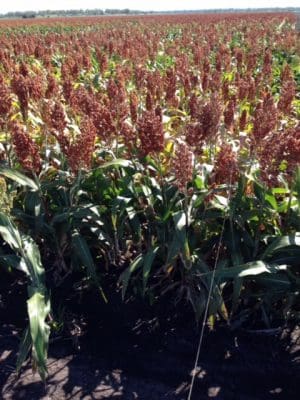 Australia is coming out of what has been one of the toughest sorghum seasons of the past decade, which saw a combination of hurdles for most growers.

Early price levels through sowing and production of the 2016/17 season pushed to recent historical lows.

This combined with an un-seasonally hot dry December/January/February saw significant quality issues across a large percentage of the southern Queensland and northern New South Wales crop.

This heat across key growing periods had significant impacts on test weight, which created higher than usual amounts of SOR2 (sub 72 kg/Hl) and in turn had a knock-on effect on yield.

The end result of these production woes saw the national production of the 2016/17 sorghum crop fall well below 1MMT.

Sorghum is again attracting the interest of those starting to plan their summer rotations.

We have seen a steady rise in new crop sorghum values over the past couple of months with recent highs for 2017/18 harvest slot prices touching some key target levels:

As recent 2017/18 cotton prices have pulled back under AUD 500/bale and similar yield and quality issues for a large percentage of dryland cotton producers out of the 2016/17 season, it is likely we will see an increase in sorghum being planted for the coming season.

There has also been an increase in available acres in key producing sorghum regions for the coming 2017/18 season.

As weather conditions for the current winter crop waned through May/June some paddocks in northern NSW and southern Queensland originally ear tagged for winter crop have now been pushed through to a summer crop rotation.

A significantly below average June rainfall for most winter crop producing regions in Australia has seen domestic prices for wheat and barley firm over $30/MT in nearly all port zones.

This weather driven price movement has not been limited to Australian markets. We have seen US wheat futures jump sharply over the past few weeks, also driven higher by weather concerns. There has been significant concerns across key spring wheat producing regions and as we progress through early July there are also red flags popping up on moisture and temperatures in Canada, as well as the US plains.

July is typically a highly volatile month for weather influences, on global grain markets and 2017 is following this trend. Along with this weather influence, sorghum has also found support from domestic consumers.

Current spreads for 2017/18 harvest period show sorghum trading at approximately a $50/MT discount to wheat in the same delivery period.

At these price spreads sorghum inclusion rates will be lifted in the poultry consumer ration and will also be on the radar for the feedlot/beef consumer.

This will see a significant lift in domestic demand year-on-year. China will remain the core export market focus and we can guarantee they will be looking closely at Australian sorghum values going into the 2017/18 harvest.

While we still have a long way to go for the upcoming summer crop season, sorghum is starting off on the right foot and remains a beacon in potential with price and acreage prospects pointing in the right direction.