SUPPLY-SIDE pressure has failed to weaken sorghum prices, which continue to climb on the back of domestic feedgrain demand and the likelihood of increased Chinese purchases resulting from its trade dispute with the United States. 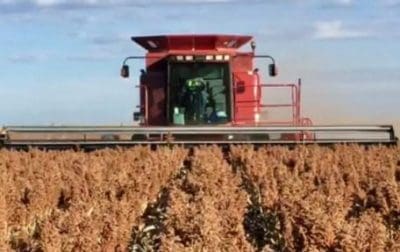 While the market is yet to report any bulk new-crop sorghum shipments out of Newcastle or Brisbane to China, container and domestic demand are pushing rates higher as the New South Wales harvest moves into its final phase.

“We’re seeing competition between export and domestic markets, and exporters have had to step up to get their boxes filled,” Narrabri broker Josh Brown, AgVantage, said.

“There is Chinese interest in containers and bulk, and I believe some of the larger buyers are looking to put together bulk shipments.

Prices for sorghum ex-farm Moree have risen from around $220 per tonne ex farm Moree in October to $300 now.

Trade sources said supply-side pressure on sorghum prices was only likely to be seen if general planting rain falls in coming weeks to get wheat and barley plantings off to a timely start next month.

“If prices stay firm, sorghum will trickle out in some parcels.”

Values for sorghum have jumped $8-$10/t in the past week for April-May delivery to around $322/t Darling Downs, $340/t Brisbane and $335/t Newcastle, and are not tracking international feedgrain values as indicated by US corn futures.

The Brisbane market is servicing the domestic stockfeed industry as well as container packers, while the Newcastle one is export focused, and bypassing domestic poultry and cattle feeders in the Tamworth and Liverpool Plains districts.

Mr Brown said quality of sorghum harvested this season was not as poor as first expected, but yields have been patchy.

“We’ve known for some time there would be decreased sorghum production based on the harsh summer that most of the planted area experienced, but the quality hasn’t been as poor as first anticipated.”

“Some growers had very poor yields, but there were some big crops around southern Queensland and the Queensland/NSW border.”

Many crops in northern NSW averaged 2.5-4 tonnes per hectare, but many performed much better than that and will return handsomely based on market strength

Manager of AMPS Grain and AMPS Storage & Handling, Simon McDougall, said most Liverpool Plains crops were yielding well, although some pockets had been disappointing.

“Crops that have been on long fallow since the 2016 winter crop have yielded around 4-4.5t per hectare on the eastern Liverpool Plains, and in the western areas, there are some growers that are getting well above 6t/ha.”

He said apprehension about a portion of the Liverpool Plains having low testweights and high screenings was abating as harvest rolled on.

“Quality has been surprisingly good, and most growers who have harvested some Sorghum 2 have been able to blend and deliver into Sorghum 1.”

AMPS operates two Liverpool Plains storages, and Mr McDougall said testweights had come in at 70.5-76 kilograms per hectolitre, with the Sorghum 1 requirement being 71kg.

“I’d say only 5 per cent has been Sorghum 2, and it’s when quality is confirmed that growers can engage the market.”

Mr McDougall estimated growers who had finished harvest were more than 50pc sold, and those still harvesting sorghum were 20-30pc forward sold.

“They’re seeing prices of $305/t plus ex farm; that’s historically high, and worth more than wheat or barley.”

“Sorghum is one of the bright spots in the commodity market. There’s good depth to the bid from major buyers and middle-tier traders buying to fill bulk and container orders.”

Depending on delivery point, sorghum is currently trading at a premium of $5-$20/t to wheat, a situation rarely seen, with the Newcastle market in the mid to high $330s for sorghum, and $320 for wheat.

“The market’s well bid at the moment, and we would encourage to growers to offer above the market to enhance farm-gate returns.”