SOUTH AUSTRALIAN growers delivered 309,021 tonnes of grain to Viterra in the week to 1 November to lift intake for the state’s major bulk handler in the current harvest to 424,911t. 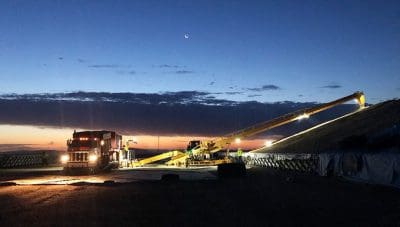 Barley remains the front-runner, accounting for more than half of last week’s deliveries at the 49 sites operating so far, following the opening of 19 over last week.

While harvest is all but over in Queensland, well advanced in New South Wales and under way in Victoria, GrainCorp is yet to issue its first weekly harvest update for 2019/20

The eastern state’s bulk handler has advised that a number of sites in NSW have opened.

They include Emerald Hill, Gunnedah, Spring Ridge and Werris Creek on the Liverpool Plains, and Coonamble, Gilgandra, Moree and Totttenham on the north-west and central west plains.

GrainCorp has advised growers wishing to use their local site to contact the company to arrange delivery.

In response to last week’s weather, Viterra altered opening hours at sites in all regions to ensure growers could continue deliveries around weather conditions.

Viterra Central region operations manager Jack Tansley said the warmer weather brought a busy start to the week for growers in the region, and both the Central and Western regions extended opening hours to assist with deliveries and beat forecast showers.