GLOBAL wheat trade has grown significantly over 10 years with a gradual shift in the major regions that are importing wheat, according to the June United States Department of Agriculture (USDA) World Agricultural Supply and Demand Estimates (WASDE) report released overnight.

The report said South East Asia and Sub-Saharan Africa have seen major growth and are now significant forces in global wheat trade alongside the Middle East and North Africa, which have historically driven demand. 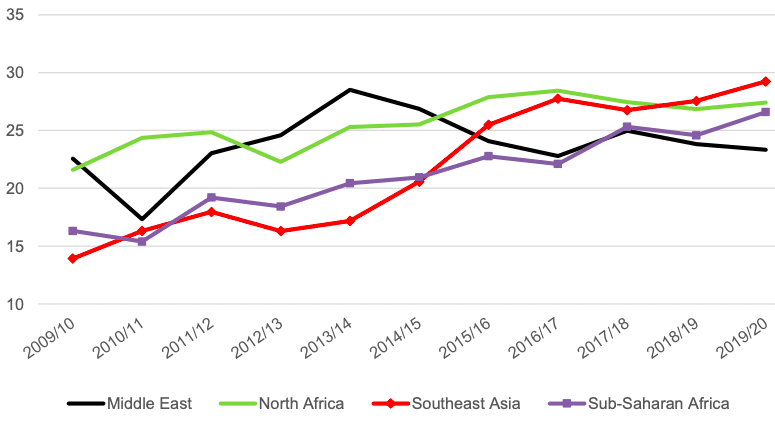 Though wheat imports by Middle Eastern countries have been declining, South East Asia has experienced more than a decade of rapid expansion partly due to a very low domestic production. July/June years. Million tonnes. Source: USDA

The USDA report said all four regions were consistent importers because their production was insufficient to meet consumption.

South East Asia is the most extreme example as domestic production is almost non-existent, meeting less than one per cent of demand requirements, and its growth in consumption has led directly to higher import demand.

For 2018-19, South East Asia is expected to be the top wheat importing region for the first time, mainly driven by strong demand in Indonesia and The Philippines.

Based on skyrocketing food and feed demand, Indonesia has more than doubled its imports in the last decade, becoming the world’s second-leading importer after Egypt.

Wheat imports for The Philippines have also more than doubled in the past decade, with a major surge occurring in 2018-19 when typhoons cut domestic corn and rice production.

In 2019-20, South East Asia is forecast again to be the world’s top wheat importing region, with Indonesia and The Philippines continuing to be the driving forces.

Wheat demand in the region continues to trend higher based on longer-term shifts in consumption from rice to wheat as diets diversify.

Additionally, with global wheat supplies projected to be more abundant, relatively lower prices are expected to provide further stimulus to demand for both food and feed uses.

South East Asian wheat imports from Russia and Ukraine have grown significantly in recent years, and with both exporters anticipating bumper crops, their grain is again likely to feature prominently in fulfilling the region’s demand.

The June WASDE said the major factors to influence world wheat production in 2019 were all but set, and reflect better Northern Hemisphere wheat-growing conditions than in either of the previous two years.

Updated Indian Government data and favourable weather to date in Russia and Ukraine have contributed to the USDA increasing its estimate for the world’s total 2019-20 available wheat supply — production plus stock — by five million tonnes (Mt) to 1057Mt, which includes a virtually unchanged estimate of the US domestic wheat crop at 52Mt.

The USDA forecast of Australia’s new crop remained at 22.5Mt, unchanged from its May estimate.

USDA raised its projection of world wheat consumption in 2019-20 by 4Mt to 763Mt on both higher food and feed and residual use.

With supplies rising more than use, it projected ending stocks up 1Mt to a record 294Mt.