THE Australian winter crop harvest is all but complete, and much of the northern-hemisphere winter crop is now sound asleep under a protective blanket of snow. 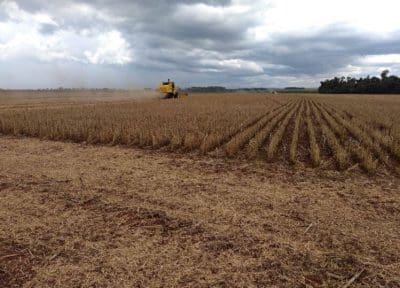 As is the case each new year, the focus of global grain production turns firmly to the weather and progress of the huge summer crop in South America.

In Brazil, the month of December has been drier than usual, and the below-average precipitation is forecast to continue through to at least 10 January. Scouts are suggesting that as much as 25 per cent of the soybean crop area is experiencing some degree of moisture stress.

Historically, this would not have been such a big problem as the pod-fill stage was typically in January, but this season is different; spring planting conditions were excellent, and many farmers took advantage by planting early. They have also increased the proportion of short-season varieties in their rotation this season.

Consequently, bean-set and pod-fill have been much earlier than normal, making the recent dryness an issue for the earlier-maturing regions. The crop is so early in some parts of central Mato Grosso that harvest commenced before Christmas.

Up to now, most of the decrease in production has been confined to the southern states of Parana, Rio Grande do Sul and Mato Grosso do Su, but there is now concern that dryness in Mato Grosso could see a cut to soybean yields in that state as well. Mato Grosso is the premier state for soybean production in Brazil, and is responsible for around one quarter of the country’s annual production. Just like the samba, summer crops are attracting plenty of attention around the globe. Photo: Jean Paul Gaultier for International Samba Day

An early soybean harvest in Brazil means new-crop beans will be available for export earlier than normal. The Chinese may have made some token purchases from the United States (US) in recent weeks, but they did have to pay “overs”.

Will China continue that strategy, or will its primary interest turn to Brazil? The higher US market has seen countries such as Bangladesh, and even Mexico, book early new-crop shipments out of Brazil for less than US offers.

Dry weather is also having an impact on Brazilian corn production. Ample land and a favourable climate with a long growing season make Brazil ideal for growing corn. Technological advances in soil management and improved hybrid corn varieties have stimulated an explosion in production that has seen it more than double since the turn of the century.

In much of the country, that enables two harvests per year. The second-crop corn is also known as the safrinha crop. This is a Portuguese word meaning “little harvest”. Historically, this was an appropriate name, but the safrinha crop is now larger than the first, or full-season, corn crop in Brazil.

The corn area is not as far ahead of normal development as the soybean crop, but there are concerns that production losses, particularly in Parana and Rio Grande do Sul, will make the carry into the safrinha harvest very tight. Price weakness has also seen farmer selling dry up into year’s end.

In contrast to Brazil, the December story for many parts of Argentina was all about too much rain. This was certainly a problem for the last of the winter-crop harvest, which has been delayed, and suffered quality downgrades as a result.

With less than 15pc of the wheat harvest to be completed, production estimates remain around 19 million tonnes (Mt), according to the Buenos Aires Grain Exchange (BAGE). That compares with the Rosario Grain Exchange estimate of 18.7Mt. Average wheat yields are reported to be just under 3t per hectare.

The BAGE estimated that the Argentine corn crop was 73pc planted as of last week, and that it was progressing in line with the long-term average. The wet December has seen an increase in the recently harvested wheat area being double-cropped into corn. A continuation of this trend, and the favourable weather conditions, could see an upward revision of corn production estimates, but it is still too early to call.

Australian sorghum production has consolidated at around the 2.2Mt mark following rain across parts of southern Queensland and, to a lesser degree, northern New South Wales, just prior to Christmas. It is going to be a long drawn-out sorghum season, as the recent rains will see planting continue well into the New Year, and we are already seeing harvest commence in the early sown regions.

Sorghum values have continued to decline relative to wheat in recent weeks, with the spread getting out to as much as $115/t leading up to the festive season.

That is certainly plenty of incentive for domestic consumers to increase sorghum inclusion rates, at the expense of wheat, in the stockfeed rations.

This in turn has the potential to push domestic demand beyond 1.7Mt. With no certainty around the aforementioned production estimate, and next to zero carry-in, it could get very interesting if China steps up to buy Australian sorghum for their specialised baijiu alcohol market.

This article was written by Peter McMeekin, who consults to Grain Brokers Australia.