Feedmills in China like this Cargill one in Zhenjiang are large users of imported corn and soybeans. Photo: Ibberson

MOVES by the Chinese Government to reduce the nation’s reliance on imported soybean meal could bode well for Australian canola exports, according to Rabobank.

Based on Rabobank China’s report entitled China’s Soybean Import Outlook Through 2030: Is the Peak Already in the Rearview Mirror? commentary from Rabobank Australia agricultural analyst Dennis Voznesenski says it could have China looking for more canola from Australia.

China is the world’s largest soybean importer, accounting for over 60pc of global trade, with soybean imports mainly driven by crushing for livestock-feed production.

The bank expects Chinese livestock-feed consumption will rise from 450 million tonnes in 2021 to 486Mt in 2025 and 523Mt in 2030, driven by continued growth in animal protein production.

Mr Voznesenski said the Chinese Government hoped to reduce the inclusion ratio of soymeal in feed from 15.3pc in 2021 to 12pc by 2030.

“In 2021 the Chinese Ministry of Agriculture and Rural Affairs issued guidelines to promote the reduction of soymeal use without consideration for animal growth rates and productivity,” Mr Voznesenski said.

To further bolster food security, the Chinese Government has set a target to increase domestic soybean production to 23Mt by 2025, up from 19.5Mt in 2022, through an increase in soybean area.

“An extra 3.5Mt of domestically grown soybeans will be helpful but unlikely to fill the void of reducing soybean meal consumption from almost 70Mt towards the low 60Mt mark.”

“To fill the void created by reducing soymeal use and increased overall feed demand by 2030, Chinese feedmills will need to seek alternative protein sources. 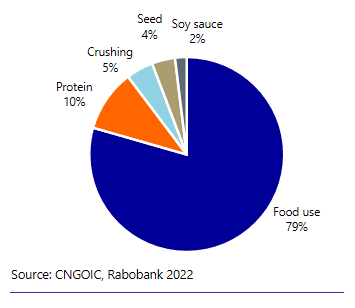 “The possibility of gradually increasing canola demand from China by 2030 comes at the same time as Canada looks to finish the construction of 3.6Mt of domestic canola crushing capacity by early 2024.

“The consequence is likely a considerable decrease in Canadian canola export availability and more export market share for Australia.”

Australia consumes around 1Mt of canola annually, and with no projects in the pipeline to expand that considerably, heavy reliance on whole seed exports looks set to continue.

Europe is already its biggest market, and while its phasing out of palm oil imports is likely to boost demand for Australian canola, Germany’s move could well jettison demand from the No. 1 customer.

“Europe, accounting for approximately 90pc of Australia’s canola export market, is looking to phase out palm oil as a biodiesel feedstock by 2030, again increasing demand for Australian canola.

In 2022, palm oil accounted for almost 40pc of feedstock used in Europe for biodiesel production.

“In order to continue producing biodiesel, alternative inputs need to be sourced, from used cooking oil to more canola.

“All three factors act as a positive for Australian canola demand,” he said.

The Rabobank analyst said markets should watch, however, a recent announcement by Germany’s environment minister that a proposal will be sent to the German Cabinet to remove crops as a feedstock from biodiesel.

“Between 2017 and 2021, approximately 30pc of Australian canola was exported to Germany and a loss of the market would likely mean a reduced local price over the longer term.

While the proposal is by no means guaranteed to pass into law, it is definitely important to watch.”