The rise and rise of feed grain

GRAIN destined for domestic animal feed use has risen to over 40 percent of Australia’s total annual grain production, reflecting the continued growth of the beef cattle feedlot and chicken meat sectors in Australia and the more recent impact of severe drought years.

Australia’s total annual grain production has averaged, with significant seasonal variations from year-to-year, around 35 million tonnes (Mt) per year over the past 20 years, according to data published in the biennial Australian Feed Reports produced by the Feed Grain Partnership. 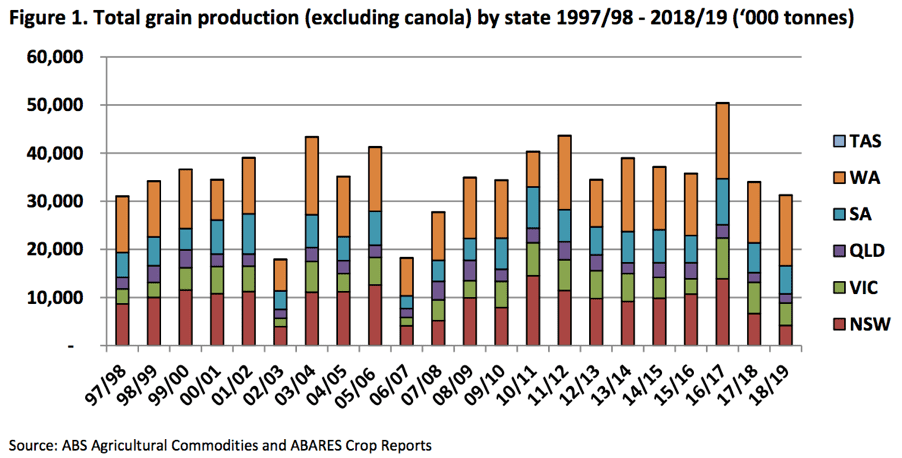 Feedgrain use has risen from around 5.7Mt per year in the mid 1990s, according to the Feed Grain Partnership’s Australian Feed Grain Supply and Demand Reports, to an estimated 13.5Mt in 2018-19.

That estimate accounts for 40 percent of Australia’s total estimated grain production in 2018-19 of 33Mt (from ABARES in its December 2019 crop report). (Other destinations included approximately 9pc to domestic flour milling, 3pc to domestic malting grain use, 2.5pc as seed retained for sowing and the surplus, 45.5pc to export markets)

However, actual feed grain usage for livestock feeding is likely to be higher again as the forecast in October 2018 did not include grain use for on-farm drought feeding.

Severe drought conditions have resulted in significantly higher levels of on-farm livestock feeding in recent years, including a strong trend towards investment in on-farm confinement feeding by cattle producers.

A firmer picture of the volumes of feed grain used for animal feeding in the past two years is expected to be available later this year when the next Australian Feed Grain Supply and Demand Report is developed and released by the Feed Grain Partnership.

The livestock industries are now the largest and fastest growing market for grain growers in the eastern states, driven principally by the beef feedlot (red line in chart below) and chicken meat (dashed black line), which have more than doubled in size since the early1990s: 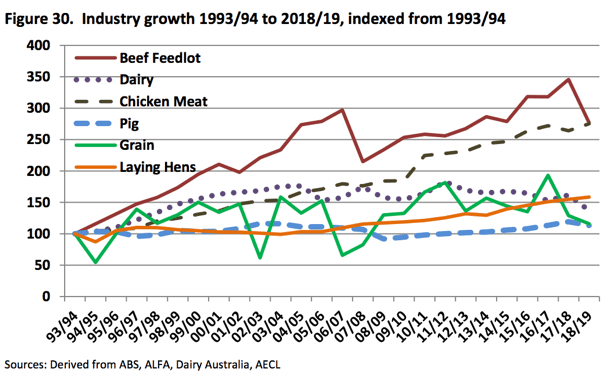 Quarterly cattle on feed reports underline the growth in cattle lot feeding in Australia over the past 20 years: 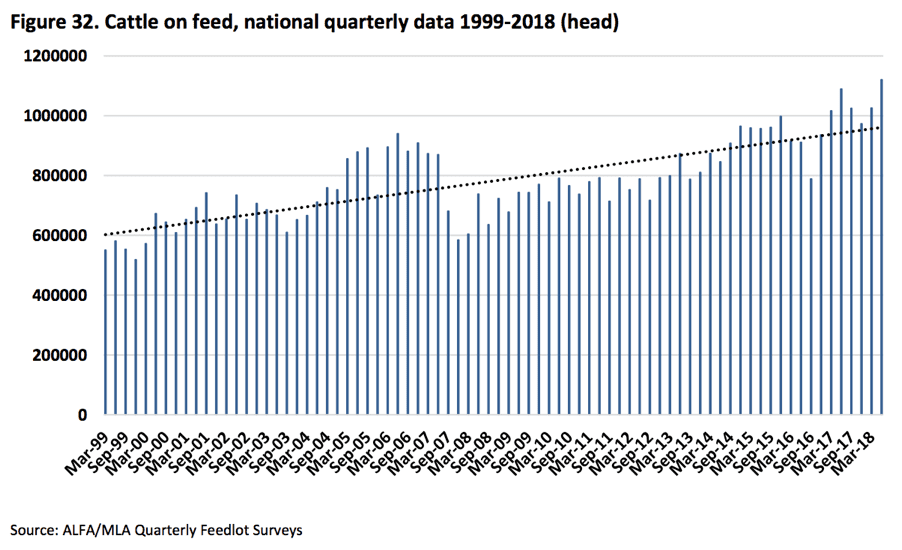 Chicken meat production has followed a similar trend over the same time frame: 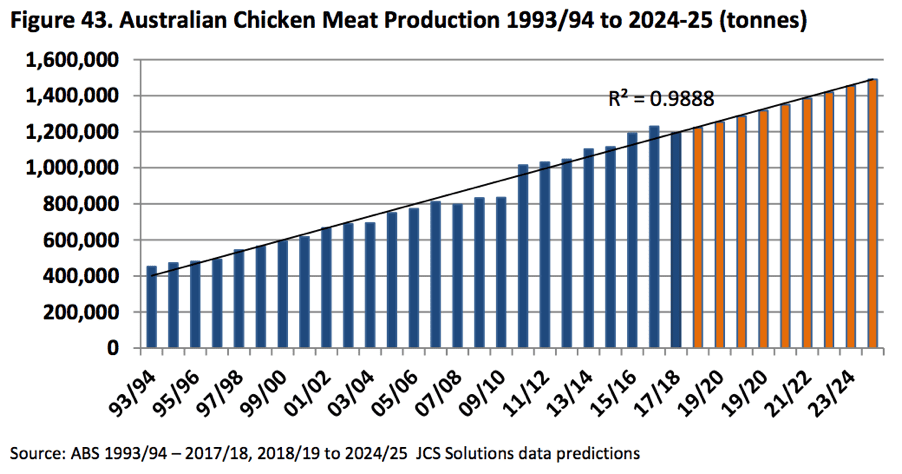 In the same period grain consumption for dairy and pigmeat production declined as a percentage of livestock feed grain use, as the two pie charts below depicting feed use by livestock industry in 2007 and then in 2017/18 show: 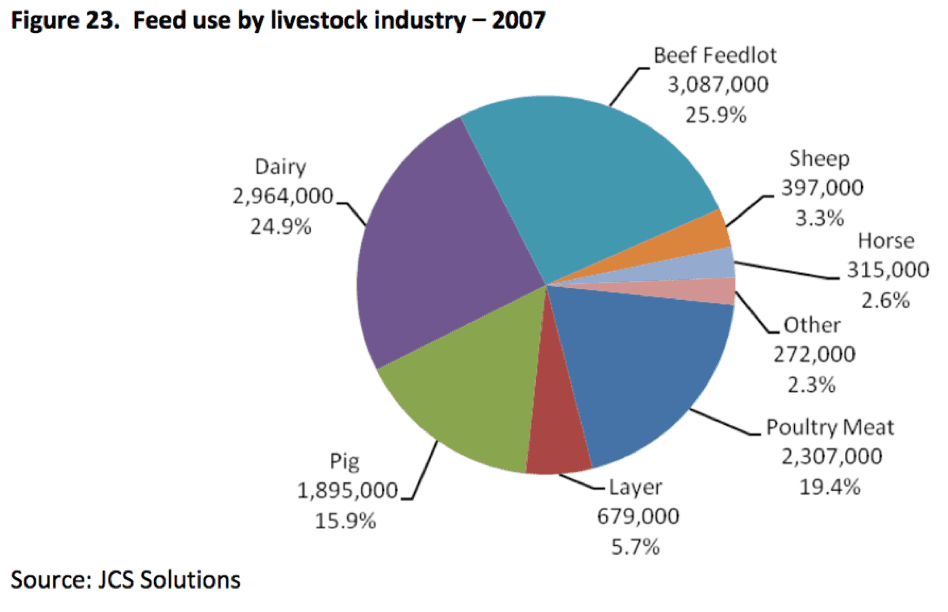 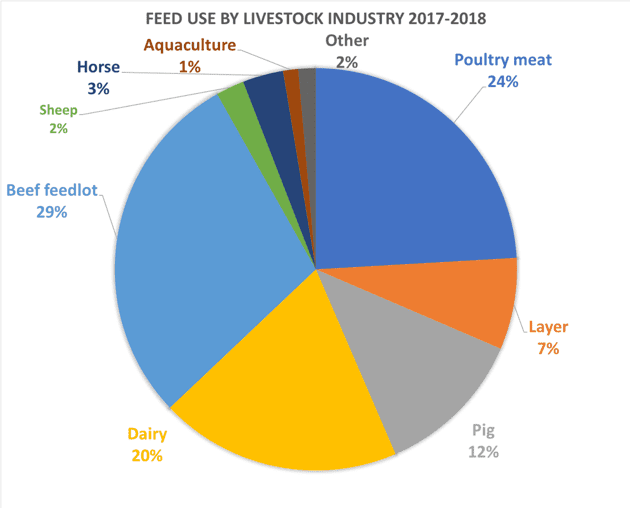 Outlook points to increasing feedgrain use

The trend of rising demand for feed grains appears likely to continue over the next 10 years, according to the Australian Grain Outlook 2030 report presented to the ABARES Outlook conference by AEGIC chief economist Professor Ross Kingwell in February.

The report predicted feed grain demand in Australia will increase by between 2.24Mt and 2.48Mt by 2030, based on an assumption that no additional volumes of feedgrains are imported and pork importation (which constrains local pig meat production) continues.