AUSTRALIA is facing the prospect of a winter crop of just 27.7 million tonnes (Mt) – the smallest since 2007/08 – as ongoing severe drought conditions continue to take their toll on many of the nation’s main cropping regions, according to Rabobank.

This represents a decline of nine per cent on last year’s already drought-diminished grain harvest and is 31 per cent below the five-year-average for Australia’s winter crop. 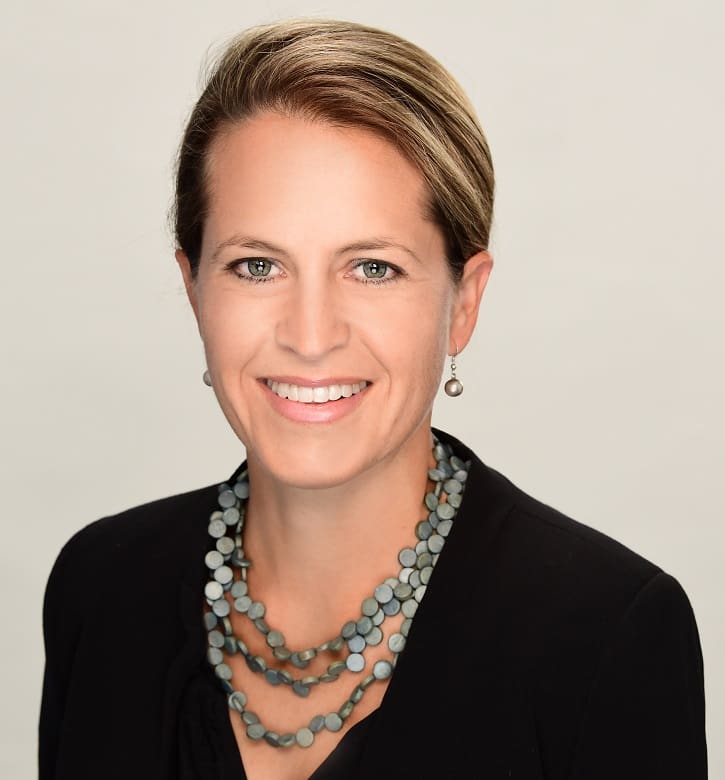 In its ‘Australian 2019/20 Winter Crop Production Outlook – Tough Times, Low Tonnes’, the agribusiness bank says while the year will see production increases in some cropping regions – most notably in southern Victoria – this “reflects the extent of last year’s decline rather than significant gains over typical production levels”.

Nor will these increases offset a significant downturn in 2019/20 production prospects for last year’s “star player” Western Australia – with less-than-ideal growing conditions set to see that state’s grain crop hobbled at 11.9Mt, 33pc down on last year.

While Queensland’s overall grain crop is expected to come in at just below 0.5Mt, down more than 30pc on last season and an “eye watering” 72pc below the five-year average.

“Conditions this season have proved testing even for Australia’s ‘most valuable player of the year’ last season, WA. After starting the season on limited soil moisture, the Western Australian crop got a good but late start and then kept up with just-in-time rainfall, only to be pulled back by a widespread and severe frost in early September, in between unseasonably high temperatures and low rainfall,” she said.

“The east coast largely was a repeat of 2018/19 with a few exceptions. Southern Victoria and central Queensland both managed to buck the national trend, with cumulative rainfall and yields reaching near to five-year average levels.”

Dr Kalisch Gordon said for many of Australia’s grain-producing regions, this would be the third consecutive year of severely drought-affected production.

“This means that the tough times are getting tougher and the tail of enduring impacts of the drought is getting longer,” she said.

“And these impacts don’t just apply to cash flow for growers – they also relate to stymied expansion plans, as well as growing soil and resource management challenges.

“This tough time for the Australian grains and oilseeds sector has reached the point where a break in the drought will just be the start of a now long road to recovery.”

Barley production is also set to fall 7pc on last year to 7.71Mt (21pc on the five-year average), with the canola crop falling 16pc year-on-year to 1.83Mt (45pc below the five year average). 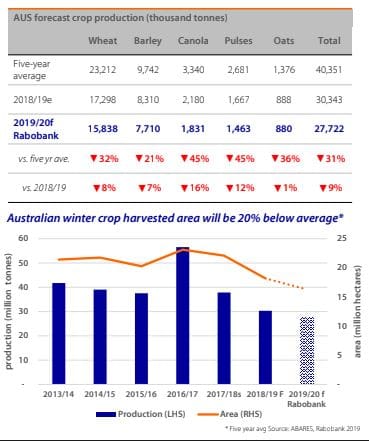 With a significantly below-average crop, the bank expects another year of limited exports in 2019/20 – the third consecutive year of below-average export volumes, Dr Kalisch Gordon said.

“Collectively, this would be 15 per cent below last year’s export program.”

“Regaining market positioning will be increasingly difficult with every year that Australia does not have a buoyant export surplus,” she said.

With another year of reduced availability of local production, a significant increase in grain imports is also on the cards, the report says, predicting the amount of grain coming into Australia to rise by 52pc from last season – taking imports in 2019/20 to 250pc above the preceding five-year average. 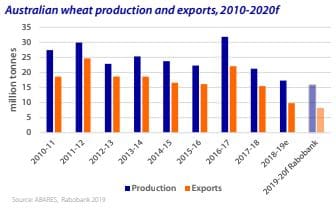 Only a year after “playing the role of Australia’s bread basket”, lower grain production is on the cards for Western Australia.

“This is the result of the combined impacts of a dry start to the season, then only hand- to-mouth rainfall during the growing season, coupled with a devastating frost during September,” Dr Kalisch Gordon said.

“The biggest percentage decline will be in the state’s canola crop, which we expect to be just 0.8Mt – only 50pc of WA’s five-year average. Increased barley plantings this year, however, will mean WA’s barley supply will remain close to the five-year average for the state.”

Despite the significantly-reduced WA crop, the state will continue to ‘export to the east’, supplying wheat and barley to the NSW and Queensland markets over the coming year, the report says.

“However, with lower WA supply, fewer livestock on the east coast and higher south eastern Australian grain supply in 2019/20, grain movement from west to east will be down considerably on last year,” Dr Kalisch Gordon said.

With a winter crop forecast to reach 5.9Mt – a year-on-year increase of 58pc – Victoria has emerged as one of the few bright spots in this year’s crop outlook.

However, it’s a tale of two parts for the state, the report says, with a noticeable divide having emerged as the season progressed between the rain-graced south and an increasingly dry north.

For New South Wales, despite a third consecutive year of below-average rainfall, crop production is set to increase significantly from “last year’s disaster”, the report says, delivering 3.7Mt. Although this is a 31pc improvement on last season, it is still lagging the five-year average by 61pc.

Similarly, South Australian crop production is forecast to be still down on average, but up some 9pc on last season, at 5.7Mt.

When it comes to prices, the outlook is relatively flat for the coming year.

“A continuation of difficult seasonal conditions and still very high feed-grain demand on the east coast is expected to maintain an elevated price floor for wheat and barley, while further international imports of wheat from Canada are expected to put a price ceiling on upside movement in the new season,” Dr Kalisch Gordon said.

Globally, Rabobank forecasts CBOT wheat prices to remain near to the US500 cents a bushel range into the fourth quarter of 2020, albeit with some limited shorter-term support for prices in coming months. This marginally-lower year-on-year global price, together with lower year-on-year (but still well-above average basis), is expected to keep domestic prices from surpassing 2018 record highs.